Her performances in musical theatre on Broadway and in the West End.

Caissie Levy is a married woman. She exchanged vows with an actor David Reiser.

Dating for around five years, they tied the knot on October 30, 2011. The ceremony was held at the Soho Beach House in Miami,

Likely, the couple gave birth to a son named Izaiah Reiser in February 2016. 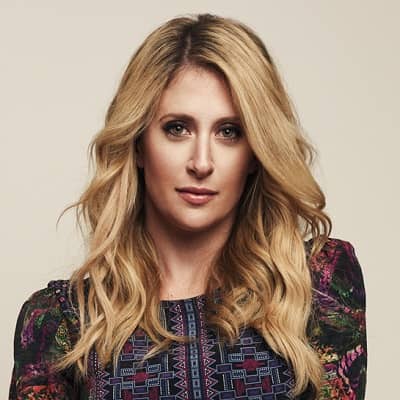 Source: The Heart of Ontario

Who is Caissie Levy?

Caissie Levy is a Canadian actress and singer. She is popular for her performances in musical theatre on Broadway and in the West End.

Caissie departed from the Broadway production recently on February 16, 2020. After Frozen, she worked there for around two years.

The actress was born on April 15, 1981, in Hamilton, Ontario, Canada. Her full name is Caissie Shira Levy.

Levy has two elder brothers, Robi and Josh, Both of them are film directors, writers, and producers, and well known as The Levy Brothers.

Talking about her nationality it’s American, and she belongs to Jewish ethnicity.

She completed her education, she attended Camp Ramah in Canada. Likely, she finished her graduation from Westdale Secondary School in 1999.

Finishing her graduation, Caissie Levy got featured as Maureen Johnson in the U.S. national tour of Rent. Caissie started her career debuting as Penny Pingleton in Broadway production’s Hairspray in 2006. Then she played Maureen in the Rent national tour. Same time, she also covered the role of Amber Von Tussle.

It was seen at the Manchester Opera House and also in London’s West End at The Piccadilly Theatre. Levy was back again on Broadway production in 2012 at the Lunt-Fontanne Theatre.

Furthermore, Caissie has also recordings for Hair and Ghost. She sang Please Don’t Let Me Go, Dear Daddy, I Am Yours. Releasing the EP in the year 2013, she performed two concerts at the London Hippodrome Casino.

The same year, she starred Sara in the Manhattan Theatre production of Murder Ballad. Then from 2014 to 2015, she played Fantine in the Broadway revival of Les Miserables at the Imperial Theatre.

Talking about her latest works, she portrayed the role of Elsa in the stage adaptation of Frozen in 2017. After a year in 2018, she again moved to Broadway.

Meanwhile, according to some sources, her net worth is around $5 million. The annual salary of an actress in Canada is around $35 thousand. So being a Canadian actress she must have good earning.

Meanwhile, she has managed to keep herself out of any type of controversy. Also, there are no rumors linked to her. She is doing great in her career.

You may also read the bio of Emma Davies, Sarah Bolger, Patricia Heaton, and Sandra Vergara.