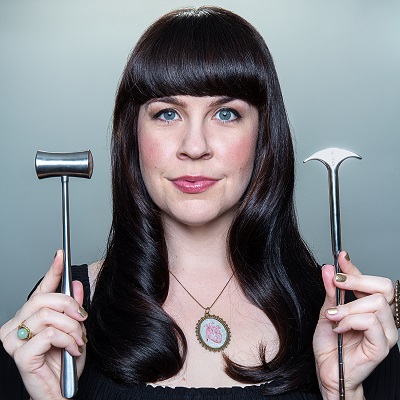 ''The most important thing I want the public to know is that the corpse is the family's legal quasi-property and that you have the power over what happens to that body. Don't let anyone, funeral home, hospital, coroner, etc., pressure you into making a quick decision you might regret. Take the time to do your research and understand your options. The dead person will still be dead in 24 hours

you have time to make the right decision for you.'' ''My dream funeral is one where the family is involved, washing and dressing the body and keeping it at home. When they've taken the time they need with the dead person, transporting the person to a natural burial cemetery and putting them straight into the ground, no heavy sealed casket or vault. Just food for worms.''

"I take my job and this whole movement incredibly seriously. I do [the videos] with a sense of humor, but it's my life, and it's really important to me that a positive death message gets across."

Who is Caitlin Doughty?

She is also the creator of the web series ‘Ask a Mortician’ and founder of ‘The Order of the Good Death’.

Caitlin was born on August 19, 1984, in Oahu, Hawaii. Details about her father, mother, and ancestry are unknown.

At the age of 8, she witnessed the death of a child falling from a balcony at a shopping mall. She was quickly taken away from the scene but she was haunted by the fear of her own mortality and her family members for several years.

She completed her schooling at St. Andrew’s Priory School, a private Episcopal all-girls college-prep school in Honolulu, US. She then joined the University of Chicago and majored in medieval history, focusing on death and culture.

She even studied the European witch trials in the early modern period.

After her graduation, she moved to San Francisco and pursued her career in the interested field. After searching for employment for six months, She was hired then by the crematory of Pacific Interment.

On her first day, she had to shave the corpse. Her most works included picking up corpses from homes and hospitals in a van, preparing them for viewings, creating them, and delivering the cremains to the families, acquiring death certificates, or obtaining the release of a body from the coroner.

Her boss and coworkers at Pacific Interment often tested her with very hands-on assignments.

In 20111, Doughty uploaded her series ‘Ask a Mortician’ on Youtube channel.

The series humorously explores morbid and sometimes taboo death topics such as decomposition and necrophilism. The series got her a lot of fanbase.

In September 2014, Doughty published her first book, Smoke Gets In Your Eyes. The book is a combination of memoir, science, and manifesto in an entertaining way that would attract a wide range of readers to the unpleasant topics of death, decay, and corpse handling.

She published her second book in October 2017 titled From Here to Eternity: Traveling the World to Find the Good Death. The book is the chronicles of her travels to see first-hand death customs in Mexico, Indonesia, Japan, Spain, Bolivia, and, USA.

Doughty’s third book, Will My Cat Eat My Eyeballs?: Big Questions from Tiny Mortals About Death, answers 35 questions sourced from children. The book originated after Doughty’s observation that most adults she encountered had not received adequate death education.

The order of the good death

Caitlin is also the founder of ”The Order of the Good Death…” It is an inclusive community of funeral industry professionals, academics, as well as artists who advocate for teaching individuals to accept death.

It also has an official website that shares articles and information by prominent figures in the death industry to make individuals more informed about the topic of ‘death’.

Caitlin has black hair and eyes with a height of 6 feet 1 inch. Her weight is of average size.

You may also know about Rachel Fong, SallyGreenGamer, and Avrey Ovard.