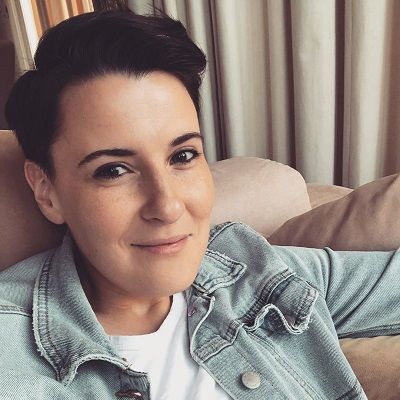 Even if she is dating, there are no details about her affairs or relationships. She is presently in love with her career and developing her passion.

Who is Caitlin Durante?

Caitlin Durante is an American writer, stand up comedian, host, and producer. She is best known for a podcast named ‘The Bechdel Cast‘.

She was born in 1986 in Pennsylvania, United States. Her ethnicity is Caucasian.

There is no information about her father, mother, and siblings as she likes to keep her personal life private.

Regarding her academics, she completed a master’s degree in screenwriting from Boston University.

Caitlin Durante is a scriptwriter and story analyst and was the program director and producer for the Nerdmelt Showroom Comedy from early 2015 to 2018. She has participated in festivals like the New York Comedy Festival, the Women in Comedy Festival and San Francisco Sketchfest.

She is also the creator and co-host of The Bechdel Cast with Jamie Loftus. Durante also teaches standup comedy to seniors at Los Angeles LGBT Center. Caitlin also teaches screenwriting classes and workshops all over the country. She also gives online classes on the internet.

Catlin also hosts ‘Sludge: An American HealthCare Story’. After all, Caitlin did songs like ‘My New Boyfriend’, ‘Male Privilege’ and ‘Odd Jobs’.

Moreover, according to some sources, the estimated net worth of her is $600,000.

As per the sources, the stand-up comedians receive a salary of $20k per year.

Caitlin Durante has a decent height equivalent to her weight. She has black hair with dark brown eyes.