Cam Newton was drafted as the first overall pick by the Panthers in the 2011 NFL Draft. 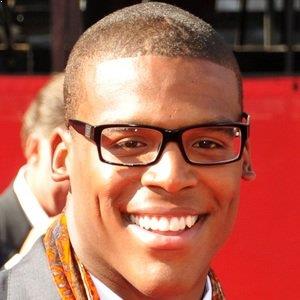 Control what you can control. Don't lose sleep worrying about things that you don't have control over because, at the end of the day, you still won't have any control over them.

Music can bring about different vibes on the field, off the field, urban life, going to church, leaving church. Everything the world may bring, there's a song for it to put you in the right frame of mind.

I. Hate. Excuses. Excuses are a disease.

I see myself not only as a football player, but an entertainer and icon.

What is the relationship of Cam Newton?

Cam Newton is currently in a relationship with his longtime girlfriend Kia Proctor. On December 30, 2015, Newton confirmed on Twitter that he and Kia had welcomed a son named Chosen Sebastian Newton on December 24, 2015, in Atlanta.

Additionally, on February 3, 2017, Newton and Proctor welcomed their second child, a daughter named Sovereign-Dior Cambella Newton. There is no detailed information regarding the future of this relationship.

Who is Cam Newton?

Cam Newton is an American football quarterback for the Carolina Panthers of the National Football League (NFL). Previously, he played college football at Auburn. Later, he was drafted as the first overall pick by the Panthers in the 2011 NFL Draft.

Newton was born in Atlanta, Georgia on May 11, 1989, as the son of Jackie and Cecil Newton Sr. Additionally, his younger brother of Cecil Newton, Jr., a center who most recently played for the Baltimore Ravens.

He became interested in the world of football in his childhood years. He is of American nationality. Furthermore, he belongs to an African-American ethnic background.

He played in five games, passing for 40 yards on 5-of-10 and rushing 16 times for 103 yards and three touchdowns. Furthermore, at Blinn College, he led his team to the 2009 NJCAA National Football Championship. Similarly, at Auburn University, he led Auburn to a 52–3 victory over Louisiana-Monroe on October 2, 2010.

Talking about his professional career, Newton signed a four-year contract, worth over $22 million with the Carolina Panthers on July 29, 2011. In the years since Newton has become one of the league’s stars. In 2015, Newton amassed 35 touchdowns against just 10 interceptions and rushed for another 10 scores, a performance that netted him the NFL MVP award.

In mid-October, he failed to show up for the team’s weekly Q&A with reporters. Newton returned the following week but suddenly exited after brushing off a question. In the 2017 season, he had surgery to repair a partially torn rotator cuff in his throwing shoulder. During Monday Night Football against the Miami Dolphins in Week 10, Newton threw for 254 yards and rushed for 95 yards with 4 total touchdowns.

Newton became part of a controversy after he was arrested and charged with felony counts of burglary, larceny, and obstruction of justice following the alleged theft of a laptop from another Florida student on November 21, 2008.

Furthermore, he also became part of another controversy after female sportswriter Jourdan Rodrigue asked a question about a teammate’s style of play, Newton remarked that it was “funny” to hear a woman ask that sort of question during an early October press conference. At present, there are no rumors concerning Newton and his career.

Talking about his body measurement, Newton has a height of 1.96m. Additionally, he weighs 111 kg. Furthermore, his hair color and eye color is black.