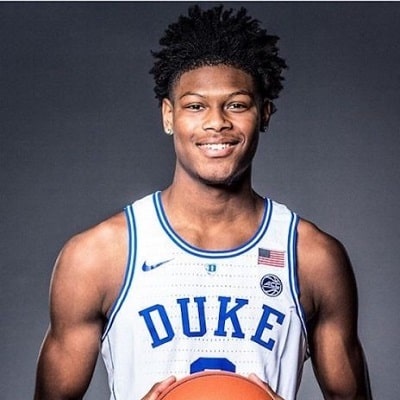 Who is Cam Reddish?

Cam Reddish is an American Professional Basketball player. He currently plays as a Small forward / Shooting guard for the Atlanta Hawks of the National Basketball Association (NBA). Additionally, he was picked 10th overall by Atlanta Hawks and declared for 2019 NBA draft on April 11, 2019.

He was born on September 1, 1999, in Norristown, Pennsylvania. His birth name is Cameron Elijah Reddish. He was born to Zanthia & Robert Reddish. Also, he has a brother named, Aaron.

Cam holds American citizenship but his ethnicity is African-American.

He joined The Haverford School in Delaware County, Pennsylvania and then transferred to Westtown School. He was rated as a 5-star recruit and is ranked as the 2nd best player in the 2018 class by 247Sports.com.

He learned to play basketball from his father. He led his high school team to win League and State Championships in 2016.

Later, he played for the US men’s National Under-19 Basketball team in the summer of 2017.

Moreover, he played college-level basketball for the team Duke Blue Devils alongside star players like RJ Barrett, Zion Williamson, etc. Similarly, he scored 22 points in a 118-84 win over Kentucky at the 2018 Champions Classic in his Duke debut on November 6, 2018.

Cam Reddish is currently playing for the Atlanta Hawks of the National Basketball Association (NBA). Additionally, he was drafted in the first round of the 2019 NBA draft by Atlanta Hawks and also represented the U-19 national team of the United States.

He revealed in a recent interview that he would like to match up against NBA player Paul George.

He must have accumulated a huge sum of money from his professional basketball carer however, he has not revealed his exact net worth. His annual salary is around $40k.

Reddish does not like to harm other persons and has been successful in keeping herself far from rumors and controversies in her personal and professional life.

Cam Reddish has a height of 6 ft. 8 inches and weighs 95 kg. Also, he has black eyes and black hair. He has stunning good looks and physical features.