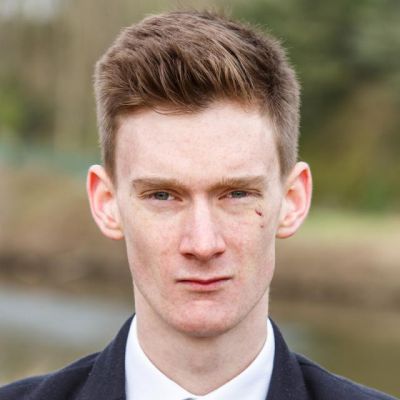 What Is The Current Relationship Status Of Cameron Ashplant ?

Talking about his love life, Cameron Ashplant is presently single and is not dating anyone.

It seems like, he is focused on making his career and hardly shares any private things. However, the juvenile actor often shares pictures with his co-stars on social media.

Who is Cameron Ashplant?

Cameron Ashplant is a well-known British actor, producer, and writer. He is the winner of ” the 2021 Best Istanbul Film Festival Awards” for Best Male Performance in A Silent Imprisonment.

In 2023, he will be seen working on two films titled, Last Flamingo of the Red Summer Sunset and Bet Your Bottom Dollar.

Ashplant was born on 8 October 1999, in Guernsey, Channel Islands. As of 2022, he is 23 years old and holds British nationality.

Similarly, his ethnicity is Guernsey and according to the astrologer, his birth sign is Libra.

However, the actor has not shared info about his parents and siblings.

As per his academics, he completed his schooling at La Mare de Carteret School and graduated from Durham University. From there he earned a degree in Geography.

In 2020, he begin his mainstream acting journey by appearing in Simon Reeve’s Amazon Prime travel series, The Balkans.

Then, he served as a producer and co-director for the award-winning short film, A Silent Imprisonment. He himself started as the film’s protagonist, Leo, alongside, Mark Gatiss who played the role of Mr. Murphy in it. The duo also won the Best Actor award at the Uruvatti International Film Festival in India.

Subsequently, he played the role of a shopkeeper, Mr. Nicholson in the Second season of the historical drama series, Gentleman Jack. Also, he played Alex in the British thriller film, Marooned Awakening.

Adding more, he landed as Jamie in the first season of the British fiction series, The Last Bus. It was released on Netflix on April 1, 2022.

In 2023, Cameron is set to star in the forthcoming historical drama film Last Flamingo of the Red Summer Sunset, which is written, produced, and co-directed by himself. In the film, he will play the role of the protagonist Sgt. Benjamin and it is set to release in 2023.

Moreover, he will be seen in the film, Bet Your Bottom Dollar, directed and written by Brandon Ashplant.

The primary source of Cameron’s earnings is by working as an actor and producer on TV and on the big screens. Regardless, to date, Ashplant has not shared the details of his exact earnings and the fees he is charged for his appearance in the movies and TV shows.

Therefore, the young star’s net worth and salary have remained a mystery for his fans as well as for the media.

The star cast of Gentleman Jack (TV series) is keeping himself away from unnecessary rumors or controversies.

He has maintained a clean profile in the media.

Cameron Ashplant has a charismatic personality. As per his age, he stands at a normal height and weight.

Likewise, he has a fair skin tone along with a set of hazel eyes and light brown hair.

Cameron is pretty active on social media platforms. His Instagram account under the username, @cameronashplant, that has garnered more than 4.9k followers.

Also, there is an unverified Facebook account under his name that has nearly 1.3k friends and followers.

Apart from these, he is absent on Twitter and TikTok.

Read more about other actors like Aya Furukawa, Marques Houston, and Bryce Papenbrook.