Cameron Diaz dated (Adam Levine, Alex Rodriguez, Elon Musk, Benji Madden). Previously, she hooked up with Adam Levine in 2010, but the relationship didn’t go well so they broke up.

Likewise, she dated Alex Rodriguez in 2010, but the relationship didn’t go well so they decided to break up in 2011. Similarly, she dated an entrepreneur, engineer, inventor, and investor Elon Musk in 2013, but they broke up.

Finally, Cameron got married to Benji Madden on 5 Jan 2015. They have a child who was born on 30 Dec 2019. They named their daughter Raddix Chloe Wildflower Madden. 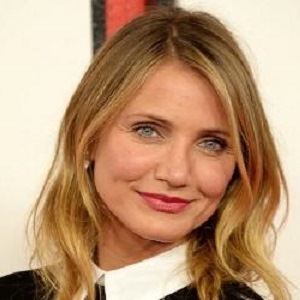 "It's been said that in Hollywood there are only 14 different scripts. Well, this is number 15

I grew up with a lot of boys. I probably have a lot of testosterone for a woman

I would kiss a frog even if there were no promise of a Prince Charming popping out of it. I love frogs. I'd lick him.

Who is Cameron Diaz?

Cameron is an American actress, producer, author, and fashion model. She is well known as Cameron Michelle Diaz. Similarly, she rose to stardom with roles in The Mask (1994), My Best Friend’s Wedding (1997), and There’s Something About Mary (1998).

Cameron was born in San Diego, California, the United States on August 30, 1972, to parents  Emilio Diaz and Billie Early. He has a sibling namely, Chimene Diaz.

Talking about her profession, at the age of 19, Cameron Diaz first started in the 30-minute soft adult movie titled ‘She’s No Angel’. Before, she made her appearance in Hollywood. During  1994, she was also starred in the hit superhero fantasy film ‘The Mask’, along with Jim Carrey, which earned her Golden Globe nomination.

In 1997, she delivered an award-winning performance in the romantic movie ‘My Best Friend’s Wedding’, starring Julia Roberts, Dermot Mulroney, Rupert Everett, and Philip Bosco. Similarly, she also appeared in ‘A Life Less Ordinary’, the same year.

During  2000, she also played the role of ‘Natalie Cook’ in the action comedy film ‘Charlie’s Angels’ starring alongside Drew Barrymore and Lucy Liu. During  2001, she also gave the voice to the character, ‘Princess Fiona’, in the animated fantasy film ‘Shrek’, directed by Andrew Adamson and Vicky Jenson.
In July of 2017, this actress announced that she is retiring from the acting field. she said that she was tired of traveling from shooting. However, as per the reports she is planning to make a comeback.

There is no information about her salary. Her net worth is around $ 140 million.

There was a rumor that, Cameron confirms that, she is actually retired. She hooked up Adam Levine in 2010. Currently, there is no information about her rumors and controversies.

Talking about her body measurements, Cameron Diaz has a height of 5 feet 9 inches. In addition, she weighs is 58Kg. Furthermore, she has a measurement of 34-23-35 inches respectively.

Cameron’s hair color is blonde and her eye color is blue. Similarly, her shoe is 9 (US) and her dress size is 4 (US).