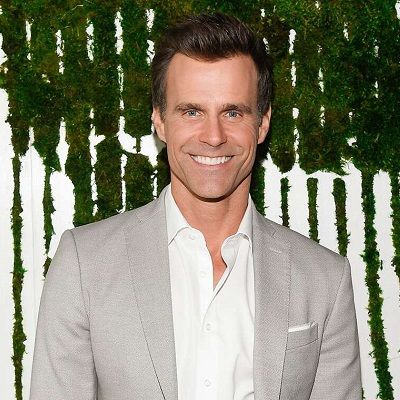 [Asked to recite his character's history on All My Children (1970)] "I've been shot at like four times. Hit once. My wife got shot and donated her heart to another person and she came back as a ghost. I flew to Chechnya to save somebody in the war. I became a billionaire. Lost it all. Then became a billionaire again. It's not as exciting as Susan. Nobody's as exciting as Susan".

On 27 July 2002, Cameron Mathison married Vanessa Mathison and they are blessed with two children(Leila Emmanuelle Mathison and Lucas Arthur Mathison).

Moreover, the family are living happily and enjoying their life.

Who is Cameron Mathison?

Cameron Mathison is a television host and Canadian-American actor. Also, he has played the role of Ryan Lavery on All My Children from 1997 to 2011.

An actor was born on August 25, 1969, as Cameron Arthur Mathison in Sarnia, Ontario, Canada. His current age is 52.

His father is Bill Mathison and his mother is  Loretta Mathison. He has a sibling Scott Mathison. His nationality is Canadian-American and his ethnicity is Caucasian. He has one sibling, his brother, Scott.

He had an interest in acting from his childhood.

After that, in 1993, he graduated with a bachelor’s degree in Civil Engineering.

He began her career as a model and started acting in commercials in Canada, the U.S., and Europe. He made his feature film debut in 54.

Furthermore, after working freelance with Good Morning America for several years, he signed with GMA in January 2009 as a regular correspondent.

Besides that, he has also made guest roles in other television work including CSI: Crime Scene Investigation, Desperate Housewives, Hot in Cleveland, and a lot more.

He has hosted the GMA Live Halloween specials as well as other live events. In 2014, Mathison joined the Hallmark/Crown Media family 2014. Mathison signed with CBS’s Entertainment Tonight in April 2015.

Mathison has been named the new co-host of Home and Family, alongside Debbie Matenopoulos; he assumed his position in September with the launch of the seventh season on July 26, 2018.

On September 9, 2019, he announced that he had been diagnosed with renal cancer (also called kidney cancer or renal cell adenocarcinoma). It is a disease in which cancer cells are found in the lining of tubules of the kidney.

He has opened up about his battle and said that his family has been very supportive of him in this difficult time. He had surgery on 24th September 2019.

The actor had announced on his Hallmark Channel ‘Home and Family’ show about his situation and further announced to his followers through an Instagram post.

Similarly, he is keeping his well-wishers updated through Instagram. He announced that the operation went successfully and he got to keep 80% of his kidney and now the tumor is gone. He is now recovering from it and is doing very well and has already been discharged from the hospital.

He has won the Soap Opera Digest Award in 1999 for Outstanding Male Newcomer and in 2002 and 2005 earned Daytime Emmy Award nominations for Outstanding Supporting Actor.

He earns a huge amount of salary but has been keeping the information private from the media and the public.

His estimated net worth is about $2 million which he earns from his profession.

He was apparently caught with his thong on during an episode of All My Children last Wednesday which caused controversy.

He has an average body with black hair and brown eyes. Besides, his height is 6 feet 2 inches and his weight is 83 kg.

Brenock O’Connor-Getting good opportunities after his acting as Olly in HBO’s Game of Thrones!

Be ready to celebrate Christmas this year with the Hallmark’s programs ‘Countdown to Christmas’!! All time favorite Lacey Chabert is also appearing in ‘The Sweetest Christmas’!! Let’s know how she feel to be back as a mother!