Cameron Richardson is an American renowned producer, actress, and model. She has two children with her husband Louis.

Cameron Richardson is married to her long-time boyfriend Louis Leterrier. Recently, the couple tied the knot on January 1, 2021. She has two children with her husband Louis.

Similarly, she has a son named Milo Shulman (b. July 10, 2010) with her ex-boyfriend, Ben Shulman. On April 3, 2017, Richardson gave birth to her second son named Gaspar Leterrier with her then-boyfriend and now-husband, Louis.

Furthermore, she welcomed her daughter on April 9, 2019. 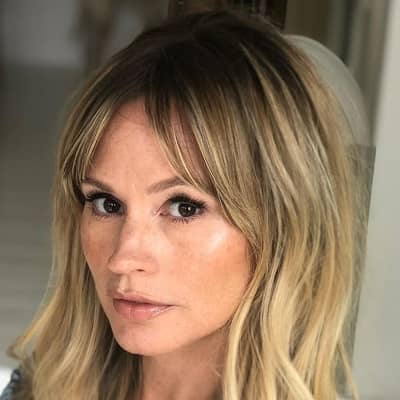 Who is Cameron Richardson?

Cameron Richardson is an American renowned producer, actress, and model. She rose to fame for her role as “Chloe Carter” on the CBS television miniseries Harper’s Island.

Cameron was born on September 11, 1979, in Baton Rouge, Louisiana, U.S. She spent her childhood in New Jersey.

The actress hasn’t revealed her parent’s and family members’ identities in the media to date. Talking about her academic background,  she attended Old Bridge High School in Old Bridge Township, New Jersey.

Cameron holds an American nationality whereas her ethnicity is Caucasian.

After graduation, Cameron moved to New York to pursue her career in the entertainment industry. She began her career as a model and modeled for several renowned magazines such as Mademoiselle, Interview, Cosmopolitan, and more.

In 2006, Richardson appeared on the cover of Ocean Drive. From January 2008 to February 2008, she was a cover model for the Women’s Health Magazine. She endorsed Dasani bottled water from The Coca-Cola Company and modeled for Forever 21’s maternity line.

Moreover, she has modeled for various brands including American Eagle Outfitters, GAP, and Lucky Brand Jeans.

Richardson began her acting career in 2000 through the crime comedy-drama series Cover Me. In the series, she portrayed the role of “Celeste Arno” until the end of the series on March 24, 2001. Afterward, she made her film debut in the 2002 comedy film Frank McKlusky, C.I. as Sharon Webber

She featured in the recurring role of Darlene on the FOX television series Skin alongside Ron Silver, Kevin Anderson, and Pamela Gidley. In 2003, she appeared in two films, National Lampoon’s Barely Legal and National Lampoon Presents Dorm Daze.

Similarly, some of her notable films and television series are,

In 2000, Richardson has been nominated for YoungStar Award in the category of Best Young Ensemble Cast in the television series, Cover Me. She was listed on #76 in Stuff magazine’s “102 Sexiest Women in The World” in 2002.

Cameron has managed to maintain a clean profile till now. She stays a mile away from any controversial acts that create a huge buzz in the media so, she hasn’t been part of any sorts of rumors and scandals.

The actress has amassed quite a fortune. As of 2022, she has an accumulated net worth of around $2 million throughout her successful career. Moreover, her salary, assets, and other income are still under review.

She has beautiful dark brown pair of eyes with blonde hair color. Likewise, her dress size is 4 (US).