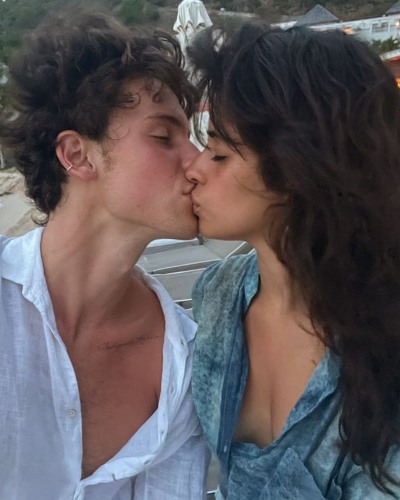 Two years of Camila Cabello and Shawn Mendes! The couple celebrated their 2 years Anniversary on a romantic getaway. On 3rd July 2021, they celebrated their two years of togetherness and posted it on Instagram. Shawn wrote on the pictures from the Caribbean,

Camila did not stay behind and shared her own posts to dedicate her lover and wrote,

Camila and Shawn have been dating each other since 2019 after they posted pictures of them kissing at the beach. They were speculated to be dating since their hit son Senorita and they began their own fairytale in real life. Talking about their relationship Cabello once said,

“about love with this guy. “It’s not just the happy blissful moments you see in pictures and videos- When you’re in a relationship with someone, it feels like they are this mirror reflecting yourself back to you- I constantly have to confront my fears, my anxieties, my insecurities, my patterns of thinking, my beliefs about life and about myself.”

She was open about relationships not being simple as it looks in the pictures but turns messy and uncomfortable. But she received strength to be braver, wiser, and better than yesterday. The couple has been enjoying each other’s company and has been going great.

Karla Camila, better known by her on-stage name Camila Cabello. She is a Cuban-American songwriter and singer. Cabello, as a lead singer released the two singles which were debuted in the Hot 100 US and Billboard in the Top 20. Cabello is famous for Fifth Harmony. Likewise, in the beginning of her career, she was influenced by the teen icons like Taylor Swift, Selena Gomez, and Miley Cyrus. Read more bio…