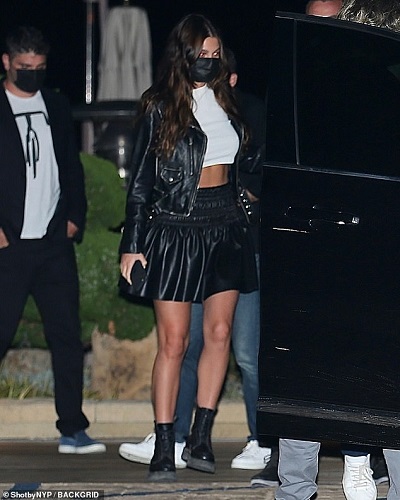 A number of couples of Hollywood are braving the coronavirus pandemic and appearing for dinner and lunch dates in and around Malibu. The latest couple to be spotted for a dinner date in Malibu was Leonardo DiCaprio, 45 and his younger girlfriend, Camila Morrone, 23. Camila looked gorgeous and turned heads.

Leonardo DiCaprio and his girlfriend of three years, Camila Morrone were spotted in Malibu on Thursday 15 October 2020 night. The actress was just looking stunning and gorgeous. She wore a white crop top with a leather miniskirt. Her legs were bare but she had worn leather ankle boots to team with the pleated miniskirt.

The couple has been keeping a low profile. After finishing their dinner in Nobu, the two walked back to their flashy black car. They were at a popular celeb eatery. Camila also had a leather jacket put on her shoulder and was in a silk face mask. Leonardo was wearing a white face mask and covered most of his face with a low baseball cap.

Camila and Leonardo were first linked in 2017 in December. But after that, they have been spotted on several occasions and their relationship has strengthened over these three years. In February 2020, she was with him at the Academy Awards function. His film Once Upon a Time in Hollywood was in the nomination list of several awards at the function. And the pandemic has brought them closer and the two were able to enjoy some great time together.

‘He is usually very independent, spends lots of time with friends, but because of the lockdown, he has mostly spent time with Camila. He loves being with her.’

His love life has always grabbed media attention. In 1999, he was dating Gisele Bundchen and they separated in 2005. From 2005 to 2011, he was in a relationship with Israeli model, Bar Refaeli. Later, he was with German fashion model Toni Garrn for 1.5 years from July 2013 to December 2014. After a gap, he again dated her in 2017. He usually does not give interviews and never discusses his private life.

Leonardo and his upcoming projects

The well-known American actor is famous for his unconventional roles. He plays characters in biopic movies and period films. One of his next major projects will be a collaboration with Martin Scorsese.

He will also be one of the lead actors of the historical crime film, Killers of the Flower Moon. This is based on the book of David Cran that has a similar name. This deals with the FBI probe into the death of Osage tribe members after there was a discovery of deposits of oil on their land. In this film, he will portray the character of one of the men who kill the tribal people.

this is an unusual role for him. Nonetheless, he has accepted it and it may help him break the stereotype. Robert De Niro will be his co-star in the movie. He will play the role of the cattle baron who assists Leonardo in doing the murders.
Zachery Ty Bryan arrested after physical dispute! Know about his failed marriage with Carly Matros, children and net worth
Tags : Actor American Actor Malibu Model