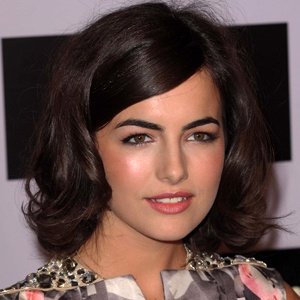 I never thought of Kim Basinger in terms of age. For me she embodies woman with her subtleties and intricacies. She's sensual and intellectually engaging, elegant with a very strong personal style.

The world that she lives in is just magical, one of the most beautiful places I've ever seen.

Hong Kong girls have a genius sense of style. I came back to the States thinking no one here has any individuality. Or cute enough socks.

Camilla Belle Routh is currently single. Previously, she dated musician Joe Jonas from late 2008 to mid-2009. They began dating after appearing in the Jonas Brothers’ ‘Lovebug’ music video. However, they decided to remain friends.

Also, she was seen with American actor, Topher Grace, at Brentwood Country Mart but they could not give their relationship a right path and separated.

Then, she was in a relationship with football star Tim Tebow for several months in 2012.

Later, she dated Chad Michael Murray in 2013 but they also broke up. Recently, she has not been linked with anyone and she is seriously adhering to her work schedule.

Who is Camilla Belle Routh?

Camilla Belle Routh is a Brazilian-American actress, writer, director, and producer. She is recognized for her work in ‘Tha Ballad of Jack and Rose’, ‘10,000 BC’, When a Stranger Calls’, and ‘Push’.

She was born on October 2, 1986, in Los Angeles, California, USA. Her birth name is Camilla Belle Routh and she is currently 32 years old. Her father’s name is Jack Wesley Routh and her mother’s name is Cristina Gould. Routh’s mother is a Brazilian fashion designer and her father is a construction company owner and former country music composer.

Her father has roots in German and French cultures and her mother has a Brazilian, Portuguese, and Italian ancestry. She was raised in a Catholic household and she grew up speaking Portuguese. Camilla would spend seasons in Santos, Brazil, where Cristina was born. She adopted the taste for Brazilian telenovelas.

Camilla holds American citizenship and her ethnicity is a mix of English, German, French, Brazilian, Portuguese.

Camilla Belle Routh appeared as a lead character in her first film ‘Trapped Beneath the Earth’ at the early age of five. She appeared in a small role in the film production of the novel ‘A Little Princess’ in 1995.

She portrayed the leading role in ‘Rip Girls’ in 2000, in which she portrayed the role of Sydney. After that, she took a small break and returned with ‘The Ballad of Jack and Rose’. She got her major breakthrough from the film ‘When a Stranger Calls’ which helped her to win several accolades.

She rosed her popularity after she appeared in the film ‘10000 BC’. The movie became a huge success in the box office and her performance was highly appreciated. Apart from her acting career, she was modeled for Vera Wang’s Princess fragrance and entered into the fashion world. Also, she appeared in different television series and movies like ‘Caveman’, ‘The American Side’, ‘Rip Girls’, and many more.

She has an estimated net worth of around $2.5 million and she has earned that sum of money from her professional career.

There was a rumor that she was dating English actor, Tom Sturridge in 2006. They were seen together in several places together but they did not confirm their relationship. However, it is heard that the pair separated by 2008.