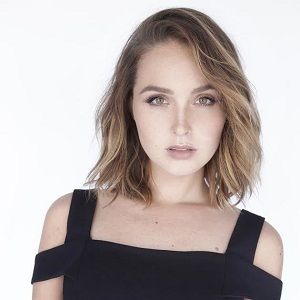 I definitely have curves. I don't intend on losing them.

When I have time, I'll be a good girl and do my chores.

As a female there aren't too many characters that are very empowering, and there's something very empowering about Lara Croft. She kicks butt and she does it in style. She's confident and she's educated.

Camilla is married to an American actor, Matthew Alan on 17th August 2019, in California coastline. The couple wanted their wedding to be held near the ocean. They took vows infront of seventy guests.

Before the couple got married, they announced that Camilla is pregnant and is expecting a baby by spring 2017. She revealed the news via a social network Instagram. She gave birth to a baby girl, Hayden Alan on 11 April 2017.

Who is Camilla Luddington?

Camilla Luddington is an English actress who is famous as Lara Croft in Tomb Raider and its sequel Rise of the Tomb Raider. She is also known as Jo Wilson in Grey’s Anatomy and Catherine Middletown in Television Film William & Kate: The Movie.

Camilla Luddington was born on December 15, 1983, in Ascot, Berkshire, England, U.K. as Camilla Anne Luddington. Her nationality is British and ethnicity is English.

Camilla studied in an all-girls school in Ascot, Berkshire and later went to The American School in England. She completed her schooling from there. She also attended Westwood High School. Camilla enrolled at Susquehanna University in Pennsylvania but after six months she transferred her study to New York Film Academy. After completing her education she went to New York to start her career and later moved to England.

After her great struggle and plenty of auditions, she landed a role in A Couple of White Chicks at the Hairdresser as a receptionist 2 in the movie in 2007. She also got a role as Flight Attendant in the movie Behaving Badly. 2010 was a great year for her. She had performed in many films and television series that year.

Camilla played the role of Jane Bennet in Pride and Prejudice and Zombies: Dawn of the Dreadfuls and Brooke in The Filming of Shakey Willis. She also played many roles in television series including The Forgotten as Emma Clark, CSI: Miami as Claire, Days of Our Lives as Tiffany and “Big Time Rush” as Rebecca.

Her television movie Accidentally In Love as Sandra and William & Kate: The Movie as Catherine “Kate” Middleton was very much praised by her fans. Camilla was also seen in the one episode of the television series Friends with Benefits the same year. In 2012, She was also a famous character as the name Lizzie of the television series Californication. Camilla worked in 10 episodes of the series. She also played the 6 episodes of True Blood. The same year she started playing on Grey’s Anatomy in which she was seen in the recurring role till 9th season and was in the main role from the 10th season. Her character was of Dr. Jo Wilson.

She had her main role in the movie Tomb Raider: The Final Hours – A Story of Survival as Lara Croft. She also gave her voice and motion capture for the video game series Tomb Raider and its sequel Rise of the Tomb Raider. In spite, she was seen in the movie The Pact 2 as for June Abbott in 2014 and in The Healer as Cecilia in 2016. She also played the role in the 2017 movie Justice League Dark.

Being straightforward to her work, Camilla did not give any of her fans a single chance to regret loving her. She has no rumors coming towards her and even she is very far from any controversies. She believes in doing her work the right keeping away from any HOAX.