Camilla Poindexter is an American model and a reality television personality. She is possibly single.

Camilla Poindexter’s relationship status is single. Though she has a daughter Dylan Noelle Poindexter born on March 18, 2016.

In October 2016, it was revealed that the father of her daughter is Donald Penn. He is a professional football player, who plays for the team, ‘Oakland Raiders.’ 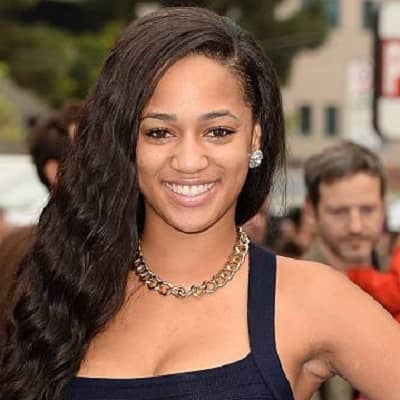 Who is Camilla Poindexter?

Camilla Poindexter is an American model and a reality television personality.

She is popular for appearing on Oxygen’s Bad Girls Club. Further, she was the runner-up of Love Games: Bad Girls Need Love Too, the fourth season.

Her mother raised her as a single parent. However, the name of her father and mother is unknown. She has two siblings Braxton and Liam.

Camilla holds an American nationality and is of mixed (British and English) ethnicity.

She received a modeling contract for 3 years when she was just 14 yrs old. Then she was aspired to become a hostess and spokesmodel in her future.

In 2004, she graduated from the Woodrow Wilson Classical High School. Studying in school, she is also involved in dancing and was also a part of a dancing group called ‘Jus Clowning.’

Camilla Poindexter signed a 3-year modeling contract was cast by Twink of an eye for a Tin her young age. Then after that, she was cast by a G4 music video.

Camilla gained fame after America’s Next Top Model in 2008. She was one of the finalists in the show.

She modeled in various runway shows for Ed Hardy and Christian Audigier afterward. Further, Camilla was also requested by Alexis Couture of Orange County Housewives to model on Alexis’ fashions in an episode.

She has appeared on various reality shows like the NBC show Momma’s Boy, the program centered on mothers. Later, she made small appearances in TV shows, such as ‘The Game,’ and ‘Real Housewives of Orange County.’

In 2012, Poindexter was a part of the eighth season of the Bad Girls Club known as ‘Bad Girls Club: Las Vegas,’ on the Oxygen channel. She was chosen as a replacement and appeared only in three episodes of the show.

The same year,  she was a contestant on season 4 of ‘Love Games: Poor Girls Need Love Too.’ She was the runner-up, losing to the winner, Amy Kieslowski.

From 2013 to 2014, she hosted several shows like Making It To The Mansion and starred in a commercial for the movie, Smurfs 2.

In 2014, Poindexter was selected to become one of the contestants for Season 2 of ‘Bad Girls All-Star Battle.’ The same year she appeared in an episode of the TV game show, Let’s Make A Deal.

She has made small appearances in movies, such as Bedtime Stories, Blame It On the Streets, and Friends With Benefits.

Following that, she rapped in a group called Flossie and was featured on the Compton’s City’s All-Star mixtape along with Snoop Dogg, The Game, and Daz Dillinger.

Camilla has been apart of different popular shows, movies, and commercials. So she must have good earning through it.

However, her exact salary is unknown. As of 2022, she has an estimated net worth of $1.4 million.

The model has not been part of any notable controversies in his career. Also, there are no rumors concerning his life.

Camilla Poindexter stands tall with a height of 5 ft 11 inches weighing around 60kg. Her body measurement is 32C-24-35 inches.

She has dark brown colored hair but prefers it to dye blonde. Likely she has a beautiful pair of black eyes.