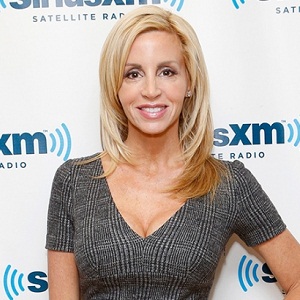 I've got a great support group, real and true friends and I'm moving forward with my life. I was sad and wanted to make things work but I'm completely fine now. I'm moving on

My children are most important to me. I'm a mother and I adore my children. I live for them.

Talking about the love life of this popular actress, Camille met actor Kelsey Grammer in 1996. They got married in Malibu, California on 02 August 1997 after one year of a beautiful relationship.

They together had two children Olivia and Jude. In 2010 Camille filed for divorce seeking full custody of their children. The divorce was finalized on February 02, 2011. Camille has accused Kelsey of physical and verbal abuse during their marriage, while Kelsey stated Camille thought she married Frasier Crane and that she was seeking fame.

After her divorce with Kesley Grammer, the actress was reported to be dating Dimitri Charalambopoulos. On October 29, 2013, Grammer filed a domestic violence protective order against Charalambopoulos, saying that he assaulted her two days after her radical hysterectomy for endometrial cancer when she was staying at Hotel Zaza in Houston Texas, recovering.

Who is Camille Grammer?

Camille Donatacci Grammer is a famous American actor who is mostly known for her role in The Real Housewives of Beverly Hills.

She is also known for her roles in Private Parts (1997), Lord of the Freaks (2015). She started her career as a dancer, model, and actress, and worked as a producer and writer for Grammnet Productions.

Camille Grammer was born as Camille Donatacci in Newport Beach, California, the USA on the 2nd of September, 1968. Her nationality is American and ethnicity is North American.

She was born in a middle-class family. Her father works in New York City as a financial adviser. She has a brother named Joseph.

She studied English Literature at Montclair State College in New Jersey. She also attended New York University and the UCLA School of Theater, Film, and Television.

This reality star started her early career as a dancer around the 80s and worked on Club MTV for many years, starring in a dance group performing at the Tavern on the Green in New York City.

She appeared in several music videos, including Give It All You Got by Rights of The Accused, The Party Starts Now! By Manitoba’s Wild Kingdom, and Back to the Grill Again by MC Serch.

Grammer owns half of Grammnet Productions which has produced a number of television shows from the late 1990s through 2010s, which includes Girlfriends, Medium, and The Game.

In 2010, Camille Grammer gained lots of popularity since she became one of the ‘The Real Housewives of Beverly Hills’. She continued with acting and appeared in various movies as a guest appearance.

Grammer has also made other appearances at various events like co-hosting the Showbiz Tonight special on CNN  live from the Academy Awards in Los Angeles and presenting at the 2011 NHL Awards in Las Vegas.

She has a net worth of $50 Million but her salary is not revealed yet.

Back in 2016, Camille Grammer made headlines through her court battle with her ex-boyfriend. There were also rumors that she was physically abused by her ex-husband Kelsey Grammar.

Health Update!! RHOBH’s Camille Grammer Opens Up About Her Second Bout Cancer Battle!! “I Am Still In Some Pain” Says Camille