Campion Murphy is a married man. He is married to Faith Ford. His wife is an American actress famous for her portrayal of Corky Sherwood on the sitcom, ‘Murphy Brown’ for which she received five nominations for the Primetime Emmy Award nominations.

The couple exchanged wedding vows on 27 June 1998. Together, the couple co-produced the short film, ‘Citation of Merit’. Currently, they live in Louisiana with their two pet dogs, Rounder, and Belle. 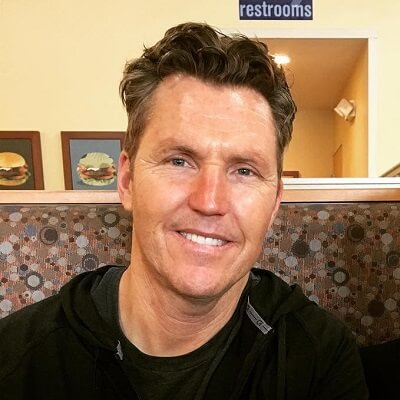 Who is Campion Murphy?

Campion Murphy is an American writer and director. He is famous for his works in Escapee (2011) and The Day I Finally Decided to Kill Myself (2013). Moreover, he is known as the husband of American actress, Faith Ford.

Campion Murphy was born as Campion Edmund Murphy in Torrance, California, USA, on November 12, 1962. As of 2021, his age is 58. There is no information about his parents. Similarly, he has not revealed anything about his siblings and other family members.

Murphy spent his childhood days in Los Angeles, California. His ethnicity is Caucasian.

Campion Murphy started his career in the entertainment business as a filmmaker. He started as an indie filmmaker, writer, and director. In 1999, he earned his breakthrough with the short film, ‘Citation of Merit (1999). The movie was inspired by his own father’s World War II experiences. Six film festivals accepted the ‘Citation of Merit’.

Since then, he has worked on several projects. Murphy worked in the half-hour pilot for ABC studios, ‘Raising Shane’. The pilot was based on his own life when he was in his early 20s and became the legal guardian of his 13-year-old nephew.

Following that, he turned his focus and attention to action-thrillers, dark comedy, and family drama. In 2011, he directed an indie-thriller titled ‘Escapee’.

The movie starred ‘Prison Break’ actor Dominic Purcell and is the story of a high-risk patient who escapes from a mental hospital and terrorizes a small town.

Murphy then wrote and directed a hybrid comedy called “Barry Avenue’ based on his own single years living in a Los Angeles bungalow.

Campion Murphy has an estimated net worth of around $2 million according to some notable online sources of 2022. His primary source of income is writing and producing and has earned a good amount of money from his career.

His wife, Faith has an estimated net worth of around $4 million.

Murphy has brown hair and a pair of brown eyes. There is no information about his height and weight.

Murphy has not been involved in any controversies. He has been able to keep himself away from any type of controversy and scandal. So far, he has not done anything controversial in his career. Similarly, there are no rumors about him of any kind.

You may also like to read the Bio, Career, Body Measurements, Net Worth, Social Media, Relationships, and more about Faith Ford, Caitlin Thompson, Cash Warren, and more.