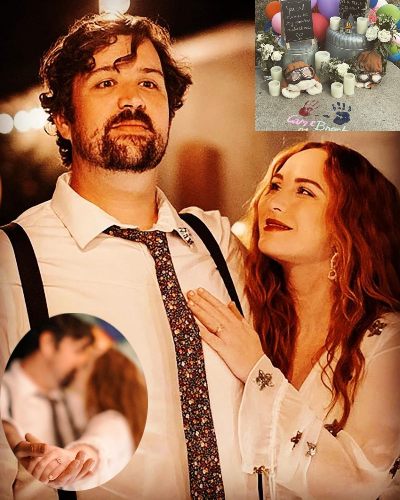 On the occasion of Grimes’s 32nd birthday, she received a pretty awesome birthday surprise from her long-time boyfriend Brock Powell.

In an interview with PEOPLE,

“It was my on my birthday, which I famously hate, and the day was hectic,”

“All I knew was that there was a dinner that night and so I couldn’t understand why Brock had me running around all day. We ended up running late for dinner and Brock said he had to stop at the house first, we pull up and he grabs our dog Riley and asks me to get out of the car and join him. He escorts me to the backyard which was lit with markets lights and candles and balloons everywhere! Then he got down on one knee and popped the question!”

In March 2021, the couple celebrated their one-year anniversary as a couple. Grimes was the youngest winner of the Daytime Emmy Award for Outstanding Youngest Actress in 2000.

“Well, he made it on the grid. Oh boy this is gonna go straight to his head.”

On 11th January, the couple announced their engagement news via respective IG handles. The couple shared two snaps; First, a blurred couple picture kissing each other in which they flaunted the proposal ring and the second snap was the Disney proposal set-up.

Powell, a voiceover actor planned the proposal in the theme of the animated movie, Up (2009).

“The movie deeply connected to both Cam and I,”

Although he used the theme, Powell also added their favorite things including their dog Riley and Disney proposal set-up.

The couple is a massive fan of Disney.

Further, he has also voiced in several Japanese anime, Video Games, and foreign live-action movies. He provided his voice to the character ‘Stephan’ for the live-action movie, Twice Upon a Time and ‘Yasuo Odajima’  in JU-ON: Origins.

It’s a baby girl!! Nick Jonas and Priyanka Chopra are officially parents and how?
Tags : Actress The Young and the Restless Voice Actor