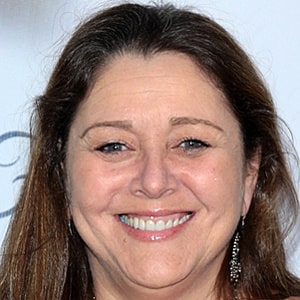 Instead of hating, I have chosen to forgive and spend all of my positive energy on changing the world.

It's okay to be a fat man. It's prestige and power and all of that. But fat women are seen as just lazy and stupid and having no self-control.

Almost everything I do is related to being fat.

Camryn Manheim is still unmarried. However, she has a son named Milo Jacob Manheim who was born on March 6, 2001. The child was born with the helo of sperm insemination. The child’s father’s name was kept secret but it was later speculated that her gay model friend Jeffrey Brezovar is the father of the child.

But, the news is still unofficial. The speculations got more confirmed when she reportedly lawyered up to have photos and mentions of Melo removed from the story that included Jeffrey.

She is currently living happily with her son and recently she posted on Twitter in support of her son in the celebrity dance show ‘Dancing With The Star’.

Who is Camryn Manheim?

Camryn Manheim is an American actress who is popular for her role as attorney Ellenor Frutt on ABC’s ‘The Practice’. In addition, she is recognized for her role as Delia Banks on CBS’s ‘Ghost Whisperer’ and as Gladys Presley in the 2005 mini-series ‘Elvis’.

She was born on March 8, 1961, in Caldwell, New Jersey, USA. She is currently 58 years old. Her father’s name is Jerome Manheim(a mathematics professor) and her mother’s name is Sylvia(a teacher). She grew up in Peoria, Illinois and she belongs to a Jewish family. She has got a brother named Karl Manheim and he is a professor at Loyola Law School.

Camryn holds American citizenship and her ethnicity is Ashkenazi Jewish.

She joined Woodrow Wilson Classical High School and worked at a Renaissance fair during her high school from where she became interested in acting. Then, she graduated from the University of California, Santa Cruz in 1984 with a BFA in degree. Also, she graduated with an MFA degree at New York University’s Tisch School of the Arts Graduate Acting Program in 1987.

She initially worked as a sign language interpreter at hospitals and her knowledge of sign language was used on ‘The Practice’ which is an episode of ‘Law & Order’. Later, she appeared as a girl in an elevator in ‘Sudden Impact’.

Camryn Manheim made her breakthrough from her one-woman show, ‘Wake Up, I’m Fat’ which was played Off-Broadway at Classic Stage Company in 1994. She won several awards and nominations for her performance on ‘The Practice’ in 1998. Also, she ap[peared in the miniseries ‘Elvis’ for which she earned Emmy and Golden Globe nominations.

Similarly, her other notable films and television credits include in ‘Chicago Hope’, ‘Wil & Grace’, ‘Two and a Half Men’, ‘Hannah Montana’, ‘The Laramie Project’, ‘Dark Water’, ‘An Unfinished Life’, and many more.

Recently, she appeared as herself in ‘Hell’s Kitchen’ and as Sheila in ‘The Magicians’ in 2019.

She was nominated for Golden Globe Award in the category Best Performance by an Actress in a Supporting Role in a Series, Miniseries or Motion Picture Made for Television for ‘Elvin’ in 2006 and won the award in the same category for ‘The Practice’ in 1999.

Also, she won Primetime Emmy Award in the category Outstanding Supporting Actress in a Drama Series for ‘The Practice’ in 1998.

She has an estimated net worth of around $12 million and she has earned that sum of money from her professional career. She owned a house for $1.1 million in 1999 and today, the house is worth around $5 million.

Many people had speculated her as a lesbian but she has denied all the rumors about her being a lesbian.

Camryn Manheim has a voluptuous figure and has a tattoo of Pegasus on her ankle. Also, she wears 12 earrings in her right ear in order to beat someone she knew who had 11. She has a height of 5 ft. 11 inches and weighs 78 kg. Camryn has deep blue eyes and light brown hair. Her body measurement is 38-31-37 inches. Her bra size is 42D and her shoe size is 11(US).