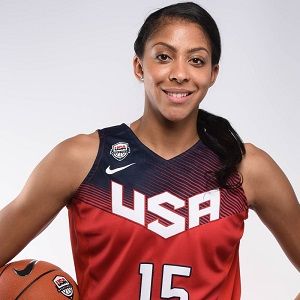 From my first dunk at 14 years old to my second NCAA Championship at the University of Tennessee, my intense training with my dad was always to credit

Today I know that there is still work to be done, but along the way my I am achieving my dreams

My dad was my first coach and drove me extremely hard from a very young age.

What is the relationship of Candace Parker?

Her marital status is married. In 2019, she married Anna Petrakova.

Recently her partner Petrakova gave birth to a son in February 2022.

He was previously married to basketball player Shelden Williams. The couple tied their knot on November 13, 2008, after dating for several months. Together, they also welcomed a daughter named Lailaa on May 13, 2009.

However, everything didn’t go well and they broke up after 8 years of marriage. Since she broke up with Shelden, she has never seen any man in the public and media.

Who is Candace Parker?

Candace Parker is an American professional basketball player. Currently, she plays for the Los Angeles Sparks of the Women’s National Basketball Association.

She has won the 2003 and 2004 Gatorade National Girls Basketball Player of the Year awards. Furthermore, she has also won the 2016 WNBA Championship and two Olympic gold medals in 2008 and 2012.

Besides this, Candace has also won WNBA Most Valuable Player Awards in 2008 and 2013 and was also the WNBA Rookie of the Year Award in 2008.

Candace was born on April 19, 1986, in St. Louis, Missouri, the United States of All-American ancestry. Currently, he is 35 years old.

She is the daughter of Sara, mother, and Larry Parker, father. Furthermore, she has two brothers, Anthony Parker, a former NBA player, and Marcus Parker, a doctor.

She grew up in Naperville, Illinois along with her parents. Growing up in a basketball player family, she had a keen interest in basketball. Moreover, she began to play at a very early age.

Moreover, her dad was the one who has been her coach and a supporting pillar throughout her career. She gives all her credit to her father.

Talking about her education, she attended Naperville Central High School. During her high school, she completed with a school-record 2,768 points and 1,592 rebounds in 119 of the 121 games.

Furthermore, she has also won the USA Today High School Player of the Year two times. In 2004, she joined the University of Tennessee. She completed her college basketball with 2137 points and rebounds per game at 8.8%.

Candace began her professional basketball career when she was picked by the Los Angeles Sparks in 2008 during the WNBA draft.

She played her debut game against the Phoenix Mercury. Furthermore, Candace recorded 34 points, 12 rebounds, and 8 assists in her debut game.

For two months may and July 2008 she earned the name of Hanns-G ‘Go Beyond’ rookie of the month.

Additionally, she also received the Hanns-G Rookie of the year and MVP for the 2008 season award.

During the 2008 Olympics, she also won the gold medal with the U.S. National Women’s Basketball team.

In 2016, Candace won the 2016 WNBA Championship. During the season, she had also scored a game-high 28 points along with 12 rebounds.

Moreover, the legendary basketball player was also included in the WNBA Finals MVP in 2016.

Recently, she was also on the 5× All-WNBA First Team. In the 2012 London Olympics, she again helped her national team to clinch the gold medal.

She has won an enormous number of awards including the WNBA Most Valuable Player Awards in 2008 and 2013 and was also the WNBA Rookie of the Year Award in 2008.

Additionally, Candace has also received NCAA Final Four Most Outstanding Player in 2008 and SEC Freshman of the Year in 2006.

Being a legendary basketball player, Candace pockets a massive amount of money from her profession.

Once, there was a rumor of Candace and Shelden William’s divorce. Later, the rumor turned out to be true as the couple broke up. Apart from that, she has never faced any controversy to date.

Candace has a height of 6 ft 4 inches and weighs 83 kg. Furthermore, she has black eyes and black hair. She wears a dress size of 8(US) and a shoe size of 13(US).

Besides this, her other body measurements are unknown.