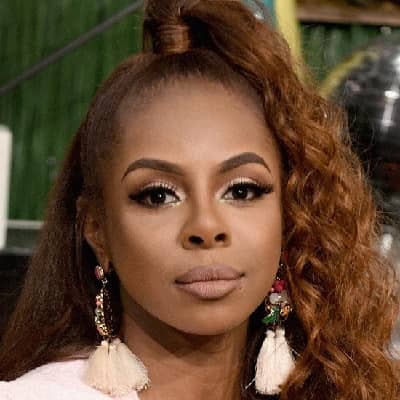 Candiace is a married woman. She is married to her husband, Chris Bassett.

The couple first met at the restaurant working together. Dating for some time, the duo engaged at Myron Mixon’s Pitmaster BBQ in May 2017. Chris proposed to Candiace with a platinum round cut diamond ring with a surprise engagement in presence of their family and friends.

The couple had a lavish wedding ceremony in Andrew W. Mellon Auditorium. They tied the knot on August 11, 2018. For the wedding, Candiace has a custom creation from Karen Sabag Couture. It took around eight months to make her wedding gown. Likely, her jewelry was with 80 yards of hand-sewn Swarovski crystals.

And talking about the groom, Chris’s black-and-white tuxedo was topped with a textured white paisley jacket accented with crisp black buttons.

In addition, Chris has three children from his past relationship.

Who is Candiace Dillard?

Candiace Dillard is one of the well-known names in pageant history. She is the titleholder of The 2013 Miss United States. Furthermore, she established herself as a reality tv star appearing on the Bravo reality show, Real Housewives of Potomac.

The star is also an entrepreneur and founded the Candiace Dillard Pageant Consulting, Prima Hair Collection, and Chateau Salon Suites.

Candiace was born on December 14, 1986, in Biloxi, Mississippi, the USA. She grew up in Atlanta, Georgia with her two siblings, Chris and Crystal.

Her father’s name is Walter Dillard and likely her mother’s name is Dorothy Dillard. They were both Air Force physicians. Her parents are divorced and her mother is now married to her boyfriend, Ronald. Candiace also has a half brother, Michael from his father’s illegitimate relationship with another women.

Likely, her nationality is American and her ethnic group is African-American.

Talking about her education, she graduated from Howard University. She has a degree in Broadcast Journalism.

During her internship, Candiace worked at the White House Office of Public Engagement and Intergovernmental Affairs. There she liaised between the White House and the African American community for President Barack Obama.

It was in the year 2009 when she founded My Sister’s Keeper. It is a mentorship and women’s empowerment organization. Furthermore, she has also served as a staffer for President Obama’s 2012 election campaign.

Additionally, in the year 2013, Candiace won the title of Miss United States. Likely, she gained more popularity after appearing on the Bravo Tv’s reality show, Real Housewives of Potomac. In the show, she stars alongside Gizelle Bryant, Karen Huger, and Ashley Darby.

Candiace is also an entrepreneur and founder/ CEO of Candiace Dillard Pageant Consulting. Likewise, she co-founded the Prima Hair Collection also. She co-owns a space for beauty professionals known as Chateau Salon Suites.

Candiace has a net worth of $4.5 million. Aside from acquiring income from her career, she also owns various organizations and companies.

Additionally, she also has her own merchandise selling different products through her website.

Furthermore, her husband Chris Bassett is a restaurateur and has a good net worth.

Her names haven’t been in any headlines with rumors and controversies.