Cara Michelle presently keeps a low-key profile. She hasn’t yet introduced anyone as her boyfriend or husband. As of now, she is possibly single. 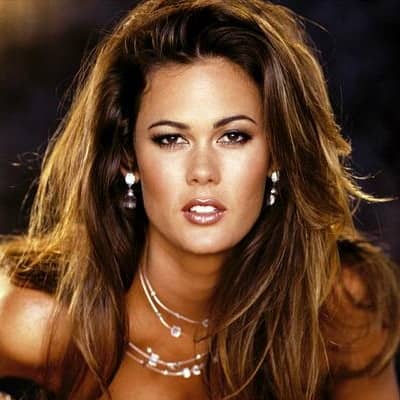 Who is Cara Michelle?

Cara Michelle is a playmate model from the United States. She was the Playboy Playmate of the Month in December 2000.

Cara was born on the small Hawaiian island of Molokai on February 1, 1978. At present, she is 43 years old and her Zodiac sign is Aquarius. Her full name is Cara Michelle Meschter. She holds an American nationality and belongs of German descent.

To date, Cara kept her parent’s identities secretive. There is no detail available regarding her family members. Cara received her liberal arts degree from Boston’s Fisher College.

At the age of 14, Cara began her modeling career in New York City. She modeled lingerie and swimsuits for four years from Istanbul to New York to Milan. She was featured as the tallest Playmate in the famous men’s magazine’s history.

In 2000, Cara appeared in a comedy film, Bedazzled, the remake of the 1967 film of the same title. The film features the personalities like Brendan Fraser, Elizabeth Hurley, and Frances O’Connor. Moreover, she has a minor role in Simon Wincer’s comedy film, Crocodile Dundee in Los Angeles.

Cara stays a mile away from any sorts of controversial acts that create headlines in the media. She hasn’t been part of such rumors and controversy to date.

Cara might have accumulated a decent amount of wealth throughout her career. However, she hasn’t yet disclosed her actual net worth, salary, and other earnings in the media.

Cara stands at the height of 6 feet 2 inches tall with an average weight. She has dark brown pair of eyes and as well a dark brown hair color. Further, her weight and other body measurements are still under review.

Pretty Little Liars actress Ashley Benson and supermodel, Cara Delevingne are having an alleged affair. Seeing each other and has been spotted publicly but not yet confirmed their relationship