Previously, she was in a romantic relationship with her boyfriend, Bill Maher who works as a TV host, comedian, actor, and so on. Also, her ex-boyfriend is known to be a wise man, who has multiple dating affairs.

The couple started dating in 2009, even the pair were spotted in various events and programs together. After two years of dating, the couple parted ways in 2011 however, the pair never disclosed the actual reason behind the separation.

Since then there has been no official relationship confirmation by Cara. 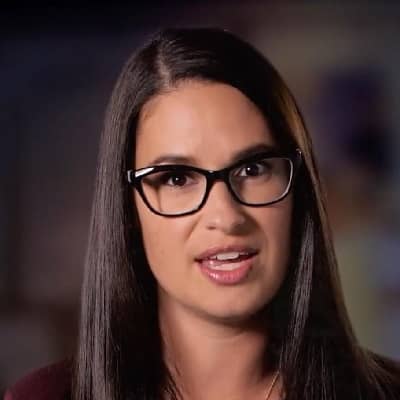 It's important to be able to be a girl and be a scientist and have neither of those things affect each other.

The minute that you make the discussion in the room more well-rounded, multicultural, and of course having differences in gender, you're going to have a different approach.

Who is Cara Santa Maria?

Cara Santa Maria is an American television presenter, podcaster, neuroscientist. She is better known as the co-host of The Skeptics’ Guide to the Universe and Techknown.

Cara Santa Maria was born on October 19, 1983, in Plano, Texas. As of 2021, she is 38 years old. She holds an American nationality and belongs to the mixed ethnicity of Italian and Puerto Rican. Her religion is Christianity and her Zodiac sign is Libra.

Her father is Italian who is an engineer and her mother belongs to Puerto Rican ancestry who is a teacher. Both her parents came from Catholic families and converted to Mormonism together. Cara’s parents divorced when she was 16 years old however, her parent’s name is unknown. She has at least one siblings, an elder sister.

Cara was a vocal Jazz performer and auditioned for the season of American Idol, but she was not selected. Then, she decided to pursue her education.

Talking about her academics, Cara earned a bachelor of science degree in psychology from the University of North Texas in 2004. In 2007, she earned a master of science in biological science with a concentration in neuroscience.

In 2020, Cara enrolled in a doctoral program studying clinical neuropsychology at Queens College, CUNY where she worked as an adjunct professor and laboratory researcher.

Cara was the laboratory manager and chief cell culture technician at the Center for Network Neuroscience before she joined the television. In 2009, Cara co-produces and hosted a pilot entitled Talk Nerdy to Me show on HBO, but it never went to air.

Besides, she also co-authored the Skeptics Guide to the Universe book. She is the spokesperson for National; Geographic’s Almanac 2019 and Almanac 2020.

Furthermore, she is currently working toward a Ph.D. in Clinical Psychology with a concentration in Social Justice and Diversity from Fielding Graduate University.

The television presenter was rumored to be in a relationship with Seth MacFarlane in 2011. Later, Cara admitted the rumor to be wrong.

Cara has an estimated net worth of $3 million as of 2022. However, she earns an excellent amount of money through her multi-profession.

The television presenter stands at a height of 5 feet 3 inches approximately her weight is unknown. She also embracing a piercing ring on her lip.

She has brown hair color as well as eyes color. Moreover, no information available regarding her other body measurement.

The television presenter is active on Instagram with over 22.2k followers. Likewise, she joined Twitter in January 2010 where she has more than 79.2k followers. She has also over 62k followers on her Facebook account.