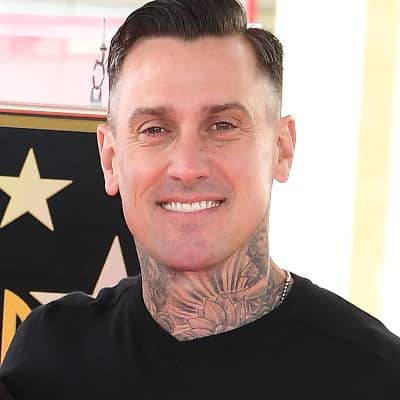 He is married to his wife, Alecia Beth Moore on 07 Jan 2006. His wife is more popular as Pink is a popular American singer.

The couple met each other firstly at the 2001 X Games. After dating for 4 yrs, Pink proposed to Carey in Mammoth Lakes California in 2005 at the Pro 250 class finals.

Their love story has lots of up and down but the couple is together now. They first broke up only two years after they began dating in 2003. Their second break up happened in February 2008, two years post they were married.

In March 2009, the couple was back together and admitted going to a marriage counselor to resolve their impending issues and to work on their marriage. They also revealed that neither one of them had signed the divorce papers.

They are now blessed with two children. Their daughter, Willow Sage was born in June 2011, and likely, son, Jameson Moon was born in December 2016.

Who is Carey Hart?

Carey Hart is a motorcycle racer, off-road truck racer, and now a businessman. He is also a tattoo artist, who owns the company Hart & Huntington Tattoo & Clothing Company.

Carey was born on the 17th of July 1975, in Seal Beach, California, USA. Hart spent his childhood in Las Vegas, Nevada.

He holds an American nationality and is of mixed (Irish, Polish, Italian, and Swedish) ethnicity.

At the age of four, he got a motorcycle from his father as a present, and since then he has been riding, and at the age of six began competing in races.

Carey’s professional career started in 1993. He joined and competed in the AMA Supercross circuit.

In the year 2000. he backflipped in 250 cc motorcycle in a competition. He formed his first-team named, Supercross in the year 2007.

Further, he created the Las Vegas club, Wasted Space in 2008 with the other teams. The rider joined with Rocky Carmichael forming RCH racing for 2013.

The rider has also hosted for ABC’s Live’s X Games FMX. He also appeared on the VH1 reality show, The Surreal Life in 2005.

Since 1999, his career has achieved its success. He won the bronze medal at the Summer Gravity Games, and the same year he won his first gold medal, at the Australian X Games.

With the beginning of the 2000s, his career reached a whole new level, uplifted winning various competitions, and medals. He receives Silver at the Las Vegas LXD Freeride MotoX and Toyota’s trick of the Week in 2000.

Talking further of his accomplishments, Carey won the silver medal at the X Games VIII in 2002. After it he earned several recognitions for best tricks and was also 4th at the X Games XVII.

Carey was awarded the 1st R.A.D lifetime achievement award in 2011.

Being one of the successful personality, his net worth is around $25 million. He owns a clothing and tattoo company named Hart & Huntington Tattoo & Clothing Company.

Further, his wife, Pink has an estimated net worth of $175 million.

The couple buys a mansion in  Malibu, California, costing $11.85 M in October 2016. They sell it on $12.5 million earning around $1 million in profit. The mansion was in 6,800 sq. ft area including access to a private beach and has its own pool, spa, and a cabana.

They also have their own motorcycles collection.

In 2004, Carey opened his own tattoo studio company along with John Huntington in Las Vegas. It was called Hart And Huntington Tatoo Company.

Furthermore, they have launched a clothing line based on the designs of the artists at the store.

He seems to be in a low profile and doesn’t share much about his life. Hence, the athlete is far from any sort of rumors or controversy until now.

Likely, his Facebook page also holds around 800K following. Furthermore, he has his own YouTube channel with around 3.9K subscribers.

Also, get to know about Kofi Kingston, Dan Taberski, and Gannon Brousseau.

12th Year Anniversary of Pink And Her Husband Carey Hart!! Wife Pink Posted A Funny Message For Carey; Also Know About Their Married Life And Family

Singer Pink writes about the wonderfulness and awfulness of marriage! She said that therapy helped save it!