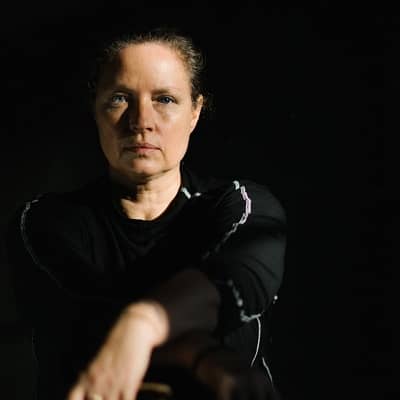 The beautiful former model as well as photographer, Carin Van Der Donk is in a blissful married relationship with well-recognized American actor, Vincent D’ Onofrio. Vincent is a famous actor, producer, director, and singer as well.

They first met in New York City in 1996 and dated for a year before getting married on 22 March 1997. The couple welcomed their first child as a baby boy, Elias Gene D’ Onofrio in 1999. Well, it was not easy for both of them as they faced several separations.

The duo used to meet for the reason of a son. However, it led to their togetherness once again. Additionally, they announced their second baby, Luka D’Onofrio in the year 2008.

In contrast, Carin is also the stepmother of Leila George from Vincent’s ex-relationship with Greta Scacchi.

Who is Carin Van Der Donk?

Carin Van Der Donk is a well-known Dutch ex-model, and a reputed photographer as well.

Donk is best famed as the better half of the well-named American actor, producer, and singer Vincent D’Onofrio.

Also, she has emerged alongside her husband at different movie premieres and red carpet events.

Carin Van Der Donk was born on 30 November 1969. As of now, her age is 51 years old. Likewise, her birthplace is Netherland. Not much known about her father and mother, Carin spend her childhood with her elder sister, Marjan van der Donk.

Talking about her nationality, Donk holds a Dutch identity whereas her ethnicity is Caucasian.

From her early age, Van was fascinated by the acting and entertainment industry.

Regarding education, Donk has not revealed any of her educational details till now.

Soon after the completion of her education, Carin Van worked for being a model. She stepped in modeling by serving two local brands. Afterward, she signed the contract with reputed hair salon brand, Bumble & Bumble where she filmed a video commercial back in the early 90s.

Donk did not uplift her modeling career after her marriage. Instead, it brought the opportunity for her to enhance her photography skills. Presently, Carin is serving as a non-professional photographer. She regularly collaborates with her sister, Marjan.

The well-named personality came into the limelight after getting married to an American actor, producer, director, and singer, Vincent D’Onofrio.

The celebrity is recognized for his roles in Metal Jacket, Netflix series DareDevil. Also, he has won many awards such as Golden Space Needle Awards, Lone Star Film and Television Award.

The multi-talented actress has earned decent money working as a model and photographer as well.

It is estimated that Carin has earned about $32k to $48k as her yearly salary. Moreover, her other sources of income are from advertisements, endorsements, and commercials.

Presently, Donk’s net worth is estimated to be nearly $5 million.

On the other side, her partner, Vincent has an estimated net worth of $40 million. Likewise, his annual income is nearly $4 to $5 million.

As per sources, Carin also lives with her husband in a mansion on Christodora House which has a value of around $2.6 million.

The veteran actress has never been part of any rumors or controversies till now.

It seems she has maintained a balance between her personal and professional life properly.

Carin Van being, 51 years old still looks so athletic and charming. The beautiful actress stands at a height of 5 feet 5 inches. Likewise, she has a balanced body weight of 56 kg.

About her social media presence, Carin Van der Donk is silently active on social media. She has nearly 2k followers on her official Instagram account @carinvanderdonk.

Carin is also active on Twitter with around 1k followers.

Vincent D’Onofrio’s married life. Separated with wife in his past but still together…