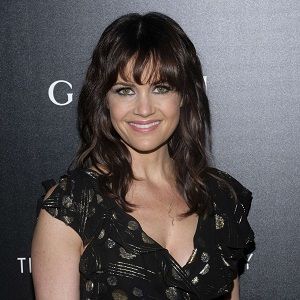 The 46-year-old American actress, Carla is an unmarried woman. Although, she has been dating Venezuelan director Sebastian Gutierrez since 2005. The pair first met on the sets of the romantic comedy film Wedding Bells Blues in 1996. Since they began dating, both of them have not involved in any extra affairs and disputes. Despite dating for almost 13 years, this couple has not decided to marry yet. Currently, Carla and Sebastian are enjoying their company and living elegantly.

Who is Carla Gugino?

Carla Gugino is an American actress. She rose to prominence from her role as Lucille in Sin City. Furthermore, her notable works include in movies such as Watchmen, Sucker Punch, Night at the Museum, San Andreas, Political Animals, and few more. So far, she has been nominated for several awards and also won Capri Italian-American Award in 2007.

Carla was born on August 29, 1971, in Sarasota, Florida, United States. Talking about her nationality, she is American and her ethnicity is Bohemian. As a child, her childhood was not so easy as her parents got separated when she was two years old.

Moreover, she had a keen interest in acting and model and she began to learn from the very early age. Concerning in her education, this veteran actress attended a local high school.

Carla began her career from the 1988 TV series Who’s the Boss? in which she played the role of Jane. Later that year, she also appeared in several TV series such as ALF, Falcon Crest, Ferris Bueller, The Wonder Years, and few more. She got huge recognition from her role as Ashley Schaeffer in 1996 show Spin City followed by Threshold, Justified, and Political Animals. Recently, she has also starred in a couple of hit series which include Supergirl, Roadies, Nashville, and The Brink.

Besides her TV career, she has also landed some brilliant roles in famous films such as Spy Kids, Sin City, Night at the Museum, American Gangster, and few more. Back in 2009, Carla appeared as Dr. Alex Friedman in the popular film Race to Witch Mountain in which she featured along with Dwayne Johnson. Additionally, the veteran actress has also acted in the lead role opposite to Dwayne Johnson. Recently, she has also appeared in the movies such as Wolves, Bling, The Space Between Us, and Gerald’s Game.

Being a famous actress, she earns a massive amount of money from her profession. Currently, she has a net worth of $14 million.

As of now, Carla has been nominated for several awards and also won Capri Italian-American Award in 2007.

Carla has a height of 5 ft 5 inches and weighs 61 kg. Furthermore, she has a pair of hazel eyes and dark brown hair. In addition, her other body measurements include 36 inches bra, 25 inches waist, and 35 inches hip size.