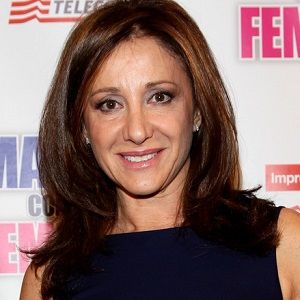 The 59-year-old Italian actress and comedian, Carla is a married woman. She tied the knot with her boyfriend Maurizio Crozza. They exchanged their vows after dating after a couple of years. Together, they also welcomed two children Giovanni Crozza and  Pietro Crozza.

Since their marriage, they have maintained a perfect relationship with them. Moreover, she has never been spotted with any man in the public and media. Additionally. she has never been involved in any affairs. Currently, Carla and Maurizio are enjoying their married life and living elegantly.

Carla Signoris is an Italian actress, TV presenter, and comedian. She is famous for her roles in movies such as Ex, Let Yourself Go, and Countdown. Furthermore, she has also appeared in a several TV series including The big night, Hollywood Party, Avanzi, and few more.

Carla was born on October 10, 1958, in Genoa, Liguria, Italy. Talking about her nationality, she is Italian and her ethnicity is also Italian. There is not any information regarding her childhood and family background.

Concerning in her education, she attended Martin Luther King high school. Later, he enrolled at the drama school of the Teatro Stabile di Genova and earned the diploma.

Carla began her career as a theatre actress when she made her theatre debut in 1980, La bocca del lupo. In the same year, she also appeared in a couple of theatre shows such as The mouth of the wolf and The American Clock. Furthermore, she has also starred in The swag of Joe Orton, The uncertain stage, Beatrici, and much more.

Some of her popular television shows are The big night, Hollywood Party, Avanzi, and Crozza Italia live. She is widely famous for her roles in the movies, Ex, Let Yourself Go, and Countdown. Some of her recent ventures include The laws of desire, Let yourself go, Mister Felicita, Leone in the basilica, and Fasten your seatbelts.

Additionally, Carla has also featured in a music video Empty to lose by Noemi which was directed by Fausto Brizzi. Apart from acting, this veteran actress has also written a couple of books which include I married a moron, Better widows than badly accompanied, and And Penelope got angry.

Being a famous actress, she earns a handsome amount of money from her profession. However, her net worth and salary are unknown.

As of now, she has won a couple of awards which include Silver ribbon in the category of Best short film actress for Countdown and Best non-leading actress for Let go.