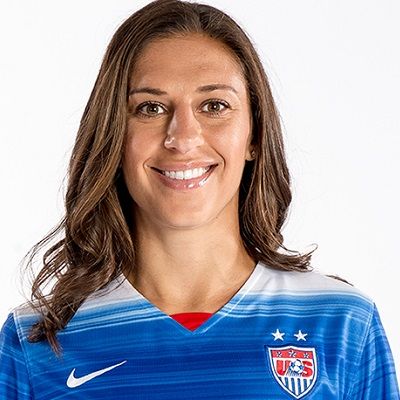 I want to leave the game as one of the best players ever. And in order to do that, you need to score in big moments. You need to rise to challenges. That's what I love to do.

The ticker-tape parade in New York City. People in windows dressed in red, white and blue chanting our names, paper flying everywhere. To know that people are so inspired by me and my teammates is incredible.

It's different. Women don't flop as much as men. It's a pride thing. I'm not sure why some men do it.

Carli Lloyd is a married woman. She is married to Brian Hollins. They married on 4th November 2016 in Puerto Morelos, Mexico. There is no news of divorce and disputes among this couple and they are living happily together.

Who is Carli Lloyd?

Likewise, she currently plays for Sky Blue FC in the National Women’s Soccer League and the United States women’s national soccer team as a midfielder.

She was born on 16th July 1982 in Delran Township, New Jersey, US. She is the daughter of Stephen Lloyd(father) and Pamela Lloyd(mother). Similarly, she has two siblings, Ashley Lloyd (Sister) and Stephen Lloyd (brother).

Likewise, she attended the opening U.S. match of the 1999 FIFA Women’s World Cup, which inspired her to play for the national team.

Similarly, she belongs to American nationality but her ethnicity is unknown.

Talking about her career, she currently plays for Sky Blue FC in the National Women’s Soccer League and the United States women’s national soccer team as a midfielder. She scored the gold medal-winning goals in the finals of the 2008 Summer Olympics and the 2012 Summer Olympics.

Similarly, she captained the United States to victory in the 2015 FIFA Women’s World Cup as well as appearing in the year 2007, 2011, and 2019 FIFA Women’s World Cups. She has made over 270 appearances for the U.S. national team, placing her third in caps, and has the fourth-most goals and seventh-most assists for the team.

Likewise, she previously played for the Chicago Red Stars, Sky Blue FC, and Atlanta Beat in Women’s Professional Soccer (WPS). In the year 2013, she was allocated to the Western New York Flash for the inaugural season of the NWSL and helped her team win the regular season championship.

Furthermore, after two seasons with the Flash, she was traded to Houston Dash prior to the 2015 season, and then to Sky Blue before the 2018 season. Moreover, her memoir When Nobody Was Watching was published in September 2016.

She has won many honors and awards. As Individual she has won Algarve Cup Most Valuable Player, U.S. Soccer Athlete of the Year, FIFA World Player of the Year Shortlist, The Best FIFA Women’s Player and many other.

As per the sources, the current net worth of Carli is around $800 thousand. Her 2016’s net worth was recorded at around $500 thousand.

She might earn a huge amount of money from her career. But she has not disclosed her salary and incomes.

Carli Lloyd has a height of 5 feet 7 inches and her weight is around 64 kg. Similarly, she has brown color hair and she has hazel color eyes.