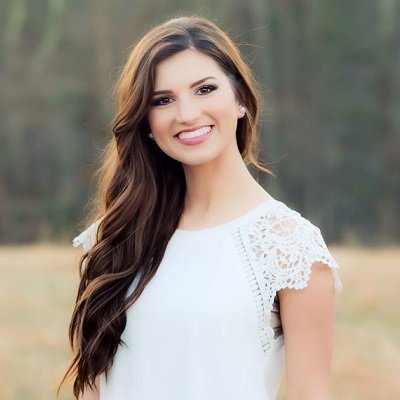 Carlin Bates is married to her long-term boyfriend, Evan Stewart. Evan is a music artist by profession.

The love bird first dated for 2 years and finally got married on the 25th of May 2019. Also, she shared a glimpse of her marriage through her posts for her Instagram followers.

Recently, on the 31st of January 2019, they welcomed their first daughter. They named the daughter, Layla Rae Stewart.

Who is Carlin Bates?

American Carlin Bates is a reality TV actress. Bates is renowned for the TV series, Bringing Up Bates.

Last, in 2019, she appeared in the same series Bringing Up Bates.

Carlin Bates was born Carlin Brianne Bates on the 11th of April 1998 in Tennessee, United States. Her father, Gil Bates is a TV actor and mother, Kelly Jo Bates is an actress. They are of British-Germanic ancestry.

– In 2012, she started her career as an actress with the TV series, United Bates of America. The show was based in the family of Bates’ which has 10 daughters and 9 sons. Together, they shared the lifestyle, family values, and their passion for the music. Altogether, she had been the part of the series for 8 episodes.

– After that, in 2015, she appeared in the show, Bringing Up Bates which was similar to their previous show. The show based on the hardship that they went through when growing up on the large family which consists of 19 children.

– With the unique content, they won the hearts of many people. The show completed its 152 episodes in 2019.

Till the date, the actress has managed to keep her life away from any sort of controversy.