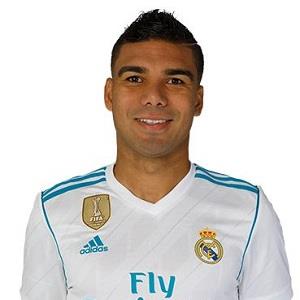 Carlos Henrique Casimiro (Casemiro) is a married man. He was dating Anna Mariana Ortega Brahm for some time. The pair decided to take the relationship a step further and hence tied the knot in June 2014.

Anna is a Brazilian makeup artist. The couple has a daughter named Sara from this relationship. The marriage is stable and is going strong as there is no news regarding any extramarital affairs at present.

Who is Carlos Henrique Casimiro?

Carlos Henrique Casimiro (Casemiro) is a professional Brazilian footballer. Currently, he plays as a defensive midfielder for Spanish Club Real Madrid and also for the Brazil national team.

Casemiro was born in São José dos Campos, São Paulo, Brazil on 23 February 1992, to parents Venancio Magda de Faria Casemiro and Servando Casimero. He became interested in the world of football since his childhood years.

He is of Brazilian nationality. Furthermore, there is no detailed information available about his ethnicity at present.  Additionally, he has a brother Lucas and a little sister named Bianca.

Talking about his education, there are no details regarding Casemiro’s educational background. `

Casemiro initially played in the São Paulo FC’s youth system. Additionally, he participated in the 2009 FIFA U-17 World Cup. He debuted in the Série A on 25 July 2010. Furthermore, his first professional goal came on 15 August 2010.

Eventually, he joined the Spanish Giants Real Madrid on loan in the late January 2013. In addition, he debuted in La Liga on 20 April 2013. After a couple of games, his move became permanent for four years at a fee of R$18.738 million.

Similarly, in the 2017–18 Champions League, he made 13 appearances and scored one goal. Talking about his international career, Casemiro appeared with the under-20s at the 2011 South American Championship. Furthermore, he is selected to play in the upcoming FIFA World Cup in Russia.

Casemiro has a salary of £90,000 weekly at Real Madrid. However, there is no information available regarding his estimated net worth at present.

Casemiro has been involved in several controversies in his career. He was involved in a controversy during May 2018 after ex-Barcelona playmaker Xavi Hernandez criticized him. Furthermore, he was also involved in a feud with Gerard Pique during the latest El Clasico game.

Talking about his body measurement, Casemiro has a height of 1.85 m. Additionally, he weighs around 84 kg. Furthermore, his hair color is black and eye color is dark brown.