Carlos Santana is a Mexican and American guitarist. He rose to fame with his band Santana. He is married to Cindy. 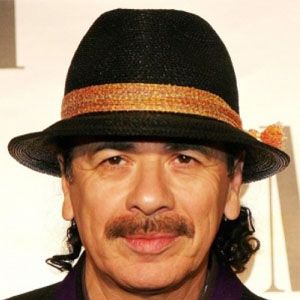 The music of Hendrix wakes people up to their possibilities. It's more than just dreaming about being a guitar hero

When I die, please don't play "Amazing Grace". Not even last. That'll piss me off. Because I'm not a wretched sinner

If I was going to pass the baton to somebody, she (Orianthi) would be my first choice.

Carlos Santana is a married person as of now. He has been married twice until now. Currently, he is married to Cindy Blackman. Cindy is a famous American jazz and rock drummer.

The couple dated for a while before Carlos Santana proposed to her on June 9, 2010, at a concert in Chicago. Later the same year, they got married on December 19, 2010.

Before this marriage, he was in a marital relationship with Deborah Santana. The married couple was married from 1972 to October 19, 2007. During their wedding, they had three children together. They are Salvador, Stella, and Angelica.

Previously, he was in a relationship with Debra Hunter in 1973. They had three children together named William Woodstock, Carlos Jr., and Carly.

As of now, he is living happily with his current wife, Cindy Blackman in Las Vegas.

Who is Carlos Santana?

Carlos Santana is a Mexican-born musician. Mostly, he is famous as the guitarist of his self-titled band, Santana. Ten times Grammy award winner, he is also a songwriter and percussionist.

Additionally, now, he is an eminent figure in the music industry as of now. Till now, he has released eight albums.

Carlos Santana was born in the city of Jalisco in Mexico. He was born on July 20, 1947. He is 74 years old. His father was also a musician. That for sure influenced his passion for music. At the early age of 5, he started playing the violin. Similarly, at the age of 8, he learned to play guitar. He has Mexican ethnicity.

As a young kid, his early influencer towards music was the late singer/songwriter, Ritchie Valens. He moved with his family from Jalisco to Tijuana and later San Francisco. His childhood was rough. It’s because he became the victim of sexual abuse at the early age of 10 to 12.

As per his education, he studied at James Lick High School and Mission High School. Later for his further studies, he had opportunities to attend California State University and Humboldt State University. But he didn’t go to college.

Carlos Santana started learning music at a very young age. During his early career, he started out with the band, “Tijuana Strip.” As per his breakthrough in music, it happened after forming the band, “Santana.” It is a Latin rock band.

Then in 1969, the band released its first album, “Santana” with a hit single named, “Evil Ways.” Apart from being the bad guy, he also released several albums as a solo artist. Some of them are “Love, Devotion, Surrender,” “Illuminations,” and “Havana Moon.”

Along with the band, his albums are “Santana,” “Caravanserai,” “Amigos,” “Marathon,” and others. He has faced several ups and downs during his music career commercially. Furthermore, he is also a vocalist. He mainly provides backup vocals. His latest album as a solo artist is “Power of Peace.”

He has been a great influencer in genres like Latin rock, blues rock, and jazz fusion.

His fame and performance help him grab a hefty amount of income or salary. Consequently, he possesses an estimated massive $120 million as his net worth.

Santana was part of rumors in several media outlets. It was his alleged relationship with Connie Hamzy that caught media attention.

Recently in 2017, he became part of the controversy. It’s because he made a statement saying “Beyonce is not a singer.” But later he apologized for that.

Carlos Santana is a man with talent and charisma. He stands tall at around 5 feet 11 inches in height and weighs 95 kg. His hair color is dark brown. Similarly, his eye color is light brown.