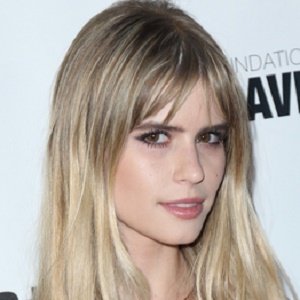 As an actress, my ultimate goal is to create a universal experience in my acting

A man should look effortless and classic. It's such a turnoff if a man is too well groomed or trendy

As far as hair products, I love Sachajuan, and I love Davines. And my hair would be just helpless without Oribe texturizing spray.

Carlson Young is a married woman now. She is married to her boyfriend of four years, Isom Innis. Her boyfriend Isom is a musician and member of the band, Foster the People. The couple began dating each other back in 2013. After four years of their affair, the couple got married on 29 April 2017. Carlson and Isom have been together for over four years now and married for less than a month. The newly married couple is very happy about their relationship. She currently resides in Los Angeles with her husband.

Before her marriage, she has been in a relationship with the handsome American model Brian Patrick Kehoe in 2007. She dated Tony Oller, a singer from 2008 to 2009.  Carlson was in an affair with the American singer-songwriter for several months in 2009 and 2010. In 2012, she began dating the American film and TV actor Lucas Till. They broke up in 2013.

Who is Carlson Young?

Carlson Young is an American actress. She is best known for her roles as Brooke Maddox on the Disney Channel’s TV series Scream (2015) and as Tiffany Blake in As the Bell Rings (2007-2009). She has also appeared in the 2016 mini-web series Last Teenagers of the Apocalypse.

Carlson Young was born as Carlson Elizabeth Young on 29 October 1990, in Fort Worth, Texas, USA. Her nationality is American and she is of English, Irish, and French ethnicity.

She is the daughter of Susannah Elizabeth(mother) and Marshall Ralph Young, Sr(father). She has a sister named Griffin Young. She began acting at the age of 14.

She went to Country Day School and graduated from there itself. She took creative writing classes at the University of Southern California. This University holds the maximum Olympic medals out of all American universities.

Carlson has been an active member in the film industry since 2007. She made her television debut in the first episode of As the Bell Rings in August 2007. She played the lead role as Tiffany Blake in the series from 2007 to 2009. She appeared in the 2009 film Heroes.

In 2010, she had roles in TV films such as Cutthroat, Pretty Little Liars, True Blood, The Dog Who Saved Christmas Vacation, CSI: Crime Scene Investigation, and The League. She also appeared in the 2013 short film The Kid. In 2015, she began playing the main character in the TV series Scream, in which she appeared as Brooke Maddox. She portrayed the role until 2016. In 2015, she had roles in the films Grimm and CSI: Cyber. In 2016, she played the role as Neon in three episodes of the mini-web series Last Teenagers of the Apocalypse.

Carlson Young: Salary and Net Worth

Neil Young reveals that he has married actress Daryl Hannah in August 2018!