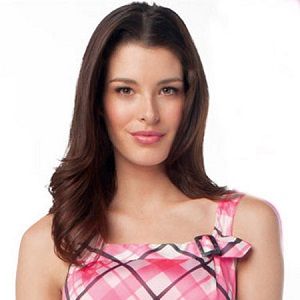 Carly Foulkes has not dated anyone publicly yet. So it is difficult to find the information about her relationship status. Maybe she is more focused to build up her career now.

Who is Carly Foulkes?

Carly Foulkes is a Canadian model, TV commercial actress, and singer who is best known as The T-Mobile Girl for her work with the brand. She has often been described as the “picture-perfect brunette” and as “one of the most recognizable brand spokespeople”.  Moreover, the model is famous for appearing on the cover of Elle magazine’s April 2009 issue.

The singer was born on August 4, 1988, Toronto, Ontario, Canada. She is a native of Toronto, Ontario. Carly is a Canadian by nationality and is British-white by ethnicity. She grew up in her hometown Toronto along with her family. Her mother’s name is Pauline Foulkes but her Father’s name is unknown.

The actress has two sisters named Kimmy Foulkes and Angie Foulkes in her family. She grew up with them and used to spend their summers in England.

Foulkes started her modeling career at the age of 13 in the Toronto area. After completing her high school education, she moved to New York City to model for agents. There she found a modeling work in Singapore and also in Europe. She started to pursue her career toward acting when she returns to New York.

In April 2009, Foulk featured in the cover of Mexican Elle magazine and in advertisements for Rugby Ralph Lauren, Tommy Hilfiger, Abercrombie & Fitch, Macy’s. She is represented by and Models and Modelwerk. With her hard work and struggle, she became the T-Mobile 4G spokesperson in fall 2010.

Carly Foulkes was said to perform in various commercials, as of December 2011. And she has also produced a dozen commercials. But in 2013, T-Mobile announces that she will not be part of the campaign. Though, she remained under contract with  T-Mobile and vaguely remained in the future plans.

Moreover, Foulkes walked the ramp for the Autumn / Winter – (New York) show for Collina Strada in 2019.

As of now, she hasn’t received any awards. But as she has a wonderful appearance and is working hard, she may be awarded in the future.

Her net worth is $3 million which she garnered from her modeling career. Likewise, she is one of the popular models who modeled for several renowned brands including  Tommy Hilfiger, Rugby Ralph Lauren,  Abercrombie & Fitch, Macy’s. And her salary is $1 million per year.

As far no rumors or controversies are there about her. She must have to maintain a good relationship with all other peoples.

Carly Foulkes has slimed built body and has maintained it properly.  The actress stands with a height of 5 ft 9 in or 175 cm. And likely she weighs 50 kg or 110 lbs. She has dark brown colored hair and hazel colored eyes. Her shoe size is 8.5 (US) and bra size 34A. And her body measurement is 32-23-34 inches.