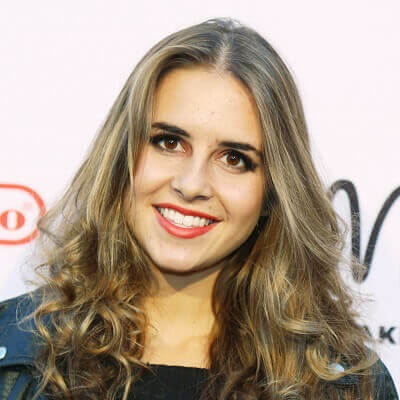 What is the relationship of Carly Rose Sonenclar?

So far, there have been no reports of her dating anyone.

Who is Carly Rose Sonenclar?

Carly Rose Sonenclar is an American actress and singer. She came to fame in 2012 after becoming the runner-up of the American reality singing TV show, X-Factor.

She has an older brother named Russell. He is a graduate of the University of Delaware.

She started singing at the age of two. She used to imitate the contestants of American Idol by watching them on TV. As a child, she took several classes in singing, piano, dancing, and acting. One of her teachers put her in contact with a talent agency in New York which eventually signed her.

Her ethnicity is Ashkenazi Jewish.

Carly Rose Sonenclar started her acting career in 2006 with the play ‘The Night of the Hunter’. She also made her Broadway debut the same year as Young Cosette in ‘Les Miserables’. She made her TV debut in the series, ‘The Electric Company’.

In October 2011, she got the lead role in the musical ‘The Big Bank’. So far, she has two feature film credits, ‘The Nanny Diaries’ and ‘The Sisterhood of the Traveling Pants 2’.

2012 was a big year for her as she became a global star. She took part in the 2nd season of ‘The X Factor and finished as the runner-up. She auditioned with the song, ‘Feeling Good.

A year later, she revealed that Syco Music has a recording option for her. She then recorded her original singles, ‘Unforgettable’ and ‘Fighters’. She has performed with Boyce Avenue a number of times.

As of 2022, Carly Rose Sonenclar has an estimated net worth of around $500k. Her source of income is acting and singing. She has earned a decent sum of money from her career as an actress. An average actress in America earns around $40k per year.

Rose has not been involved in any controversies. She has kept herself away from any kind of controversy and scandal. So far, she has not done anything controversial in her career. Similarly, there are no rumors about her.

Carly stands at a height of around 5 feet. She weighs around 46 kg. Her hair color is brown and similarly, her eyes are also brown in color.

You may also like to read the Age, Bio, Net Worth, Career, Relationships, Social Media, and more about Harry Styles, Channing Tatum, Bruno Mars, and more.