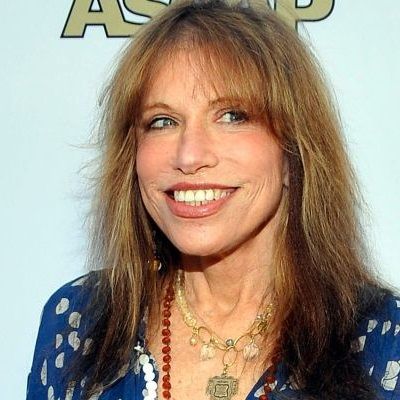 At first, Carly Simon was married to James Taylor. They married on 3rd November 1972. Similarly, they have two children Sarah Maria Taylor(7th January 1974) and Benjamin “Ben” Simon Taylor (22nd January 1977). But they divorced in 1983.

Likewise, she was engaged to William Donaldson and Russ Kunkel. After that, she married James Hurt. He is a writer, poet, and businessman. they married on 23rd December 1987. But they divorced in 2007.

Who is Carly Simon?

Carly Elisabeth Simon known as Carly Simon is an American singer-songwriter, musician, and children’s author. She became famous in the 1970s due to her hit records like Anticipation, You Belong To Me, Coming Around Again, Mockingbird and many others.

Similarly, she has won 2 Grammy Awards from the 14 nominations.

She was born on 25th June 1945 in The Bronx, New York City, US. She is the daughter of Richard L Simon (father) and Andrea Heinemann Simon (mother). Similarly, her father was the co-founder of Simon & Schuster and a classical pianist.

Her mother was a civil rights activist and singer. Talking about her siblings she has two elder sisters Joanna and Lucy. She has a younger brother named Peter as well.

Similarly, she belongs to American nationality and her ethnicity is mixed (Ashkenazi Jewish, German and Cuban which includes African, Spanish and Indigenous).

Talking about her education, she attended Sarah Lawrence College and Riverdale Country School.

Her career began with a short-lived music group with her sister Lucy, as the Simon Sisters. Similarly, they had a minor hit in the year 1964 called “Winkin’, Blinkin’, and Nod”. After that, their second album, Cuddlebug, followed later that year. Also, the duo made one more album together 1969’s The Simon Sisters Sing the Lobster Quadrille.

Later, she collaborated with eclectic New York rockers Elephant’s Memory for about six months. Similarly, she also appeared in the 1971 Miloš Forman film Taking Off, playing an auditioning singer and sang “Long Term Physical Effects” included in the 1971 soundtrack for the film.

Likewise, she was signed by Jac Holzman to Elektra Records in the year 1970. After that, she released her self-titled debut album, Carly Simon in March 1971. As the album contained her breakthrough top-ten hit “That’s the Way I’ve Always Heard It Should Be”.

Moreover, the album peaked at No. 30 and the single peaked at No 10 on the Billboard charts. Also, her second album Anticipation came in November of that same year. She also appeared in films, such as the 1971 Miloš Forman film Taking Off, in which she played an auditioning singer.

Talking about awards, she received three Grammy nominations including Record of the Year and Song of the Year. Similarly, she became the first artist to win a Grammy Award, an Academy Award, and a Golden Globe Award.

Likewise, she received the Boston Music Awards Lifetime Achievement and a Berklee College of Music Honorary Doctor of Music Degree. Furthermore, she was inducted into the Grammy Hall of Fame in 2004 and awarded the ASCAP Founders Award in 2012.

She has the estimated net worth of $65 million. Similarly, she might earn a huge amount of money from her career but she has not revealed her salary and incomes. She had a successful career so she might have earned a huge amount.

Carly Simon has a height of 5 feet 10 inches and her weight is around 58 kg. Similarly, she has blonde hair and grey eyes.