Carmen Electra is a dancer, model, actress and was ranked No 28 in 2007's Maxim magazine Hot 100. Carmen is married and divorced twice and currently single. 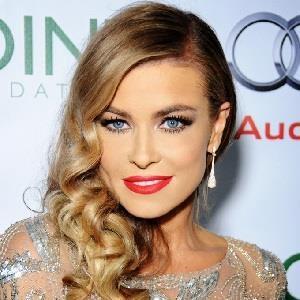 I went to the Performing Arts School and studied classical ballet. That attitude is something that's put into your head. You are never thin enough

No matter where I've been overseas, the food stinks, except in Italy

People are surprised at how down-to-earth I am. I like to stay home on Friday nights and listen to 'The Art of Happiness' by the Dalai Lama.

Carmen Electra has been married twice and has been in a number of relationships till now.

Her first husband was the famous American basketball player, Dennis Rodman. They got married in 1998 and divorced a year later.

She got married for the second time in 2003, with the famous American musician Dave Navarro. After staying together for over three years, they divorced in 2006. She didn’t have any children in her married life.

Talking about her other relationships, she dated Rob Patterson, an American guitarist for several years. After dating each other for a while, they got engaged in 2008 and separated in 2012.

She also dated Jamal Rashid for almost a year in 2013.

She also had an affair with the AGT’s judge, Simon Cowell for few months in 2013.

She is unmarried and single currently. Talking about her kids, she does not have any children.

Who is Carmen Electra?

Carmen Electra is an American glamor model, actress, and television personality. She has also established herself as a successful singer and dancer of America. She is best known for her role on the American action drama series Baywatch.

Carmen Electra was born Tara Leigh Patrick on April 20, 1972, in Sharonville, Ohio, United States. She is the youngest of six children of Harry Patrick and Patricia Patrick.

Her father is a guitarist and entertainer and her mother was a singer. Her mother died in 1998. She has four elder brothers. Her one elder sister, Debbie died in 1998. Carmen is an American by nationality and is of mixed(English, German, Irish, distant Dutch) ethnicity.

As a child, she attended Ann Weigel Elementary School. After that, she attended School for Creative and Performing Arts (SCPA) and studied dance under Gloria J. Simpson at Dance Artists studio in Western Hills until age nine.

After that, she attended Barbizon Modeling and Acting School in Cincinnati and studied acting.

After graduating from Barbizon School, Carmen started her professional career in 1990 as a dancer at Kings Island in Mason, Ohio, in the show “It’s Magic“. After a year, she moved to California and signed a recording contract with Prince’s Paisley Park Records, and began a short-lived singing career. She released her first single “Go Go Dancer” in 1992.

The following year, she released her second single “Everybody Get on Up” and the third one titled “Fantasia Erotica” in 1993. She made her television debut in 1997, playing a small role in American Vampire.

She gained fame when she was featured in a nude pictorial in Playboy magazine in May 1996. In 1997, Electra modeled for the covers of the comic books including Razor and the Ladies of London Night by London Night Studios. She got her big break in movies with a role in the horror film Scary Movie (2000).

In 2004 she appeared in the remake of the 1970s TV show Starsky & Hutch (2004), for which she won the MTV Movie Award for Best Kiss. Since then, she has appeared on several magazine covers and films.

She has appeared in more than thirty videos till now. With huge popularity and a large fan following, she has accumulated a net worth of 15.2 million dollars.

There is no rumor of her dating anyone at the present time. She has not been in any controversy in her entire career.

Carmen Electra; revealing the Divorce with Dave; Story about Dennis and Clearing all the rumor of her relationship!!!