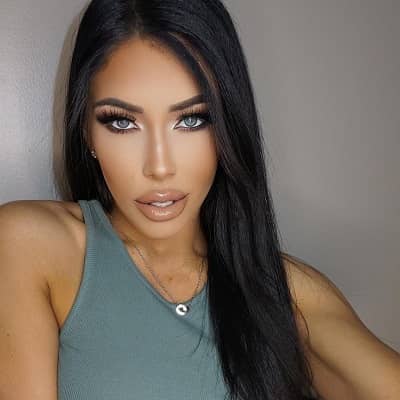 Carmen Ortega is currently dating a guy named Alexsandre. She often posts pictures on her Instagram handle and the pair also visited Whistler Blackcomb and skied there in March 2019. However, there is not much information available regarding her current boyfriend.

Ortega came into the limelight of the media after having a short-lived affair with Reggie Bush, an NFL running back player back in 2010.

During the time, Reggie Blush was in a relationship with Kim Kardashian and it’s long been rumored that Kim blames Carmen for the end of their relationship.

In 2014, Ortega has been in a relationship with singer-songwriter Jason Derulo. However, their relationship also didn’t work out separated after a month of dating. Furthermore, her name was formerly linked with LeBron James.

Who is Carmen Ortega?

Carmen Ortega is a former international model, designer, socialite, and entrepreneur. She is an official brand ambassador of 138 Water and the founder of Inf1uence, an influencer marketing, and management agency based on the gaming industry.

The model was born on January 30, 1985, in Illinois, United States. At present, she is 36 years old and her sun sign is Aquarius. Likely, she follows the Christianity religion. She holds an American nationality and is of Hispanic descent.

Carmen hasn’t yet disclosed her parent’s and sibling’s identities in the media. However, she has a cousin named Pamela Soto. Also, her academics details are under the curtains at the moment.

Carmen began her modeling career at 14 years old. She has featured in various magazines such as Elle, FHM, Maxim, Rolling Stone, and more. She was the cover model of “The Black Men” magazine in November 2009.

In 2013, she became 138 Water’s official spokesmodel and ambassador. Ortega has also her own jewelry line called Bella Carmen Jewels along with celebrity jeweler Nick Montfort. Apart from this, she is also designing her own bikini line.

Similarly, social media platform helps her to garner fame and recognization. She has been featured in numerous music videos and has released her own singles called “Satisfaction” and “Party Life”. Moreover, she appeared in the E! Show “Hollywood Cycle”.

To date, Carmen has managed to maintain a clean profile. She hasn’t been part of any sorts of rumors and disputes that create a huge buzz in the media.

Carmen has able to accumulate a fair amount of fortune throughout her multiple profession. Although she has not disclosed her annual income in the media. As per other online sources,  she has an estimated net worth of around $2 million.

The entrepreneur stands at the height of 5 feet 3 inches tall and her weight is around 54 kg. Her waist, hip, and bra sizes are 26, 37, and 36 inches. Similarly, she wears 7 (US) shoe sizes. She has a hazel-grey pair of eyes with dark brown hair.