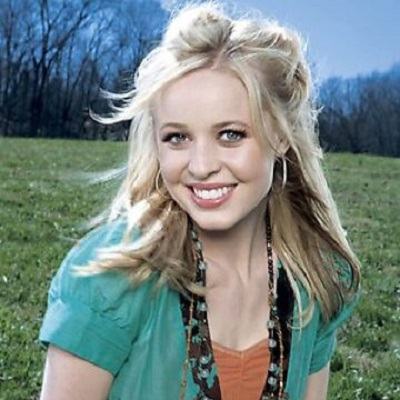 I'm really afraid of basements. When I was about 4 or 5 years old, my sister locked me in the basement. She slammed the door and it was pitch black. I remember running up the stairs, terrified that something behind me was going to get me.

Don't ask fellow contestants what song you should sing, they'll pick the bad one.

Carmen Rasmusen is married to the Cinematographer Bradley Herbert. The wedding took place on the 15th of December 2005 in Bountiful, Utah.

Together, they welcomed their first son, Boston in December 2008. Two years later, the couple was blessed with another son, Beckham Herbert.

Who is Carmen Rasmusen?

Canadian-American Carmen Rasmusen is a country singer and actress. Rasmusen is renowned as Marilyn of Down and Derby.

Also, she is popular for the second season of the American Idol.

Currently, she is a columnist for the newspaper, Deseret News.

He was born Carmen Rasmusen Herbert on the 25th of March 1985 in Edmonton, Alberta, Canada. She is of Norwegian ethnicity.

She has three siblings. Till the date, she has not disclosed any details of his mother and father.

In 2003, she graduated from the Woods Cross High School in Northern Utah. Later, she joined the Brigham Young University in Provo, Utah.

She started singing from age five. At the time, she used to perform in the public. Her performance includes singing, dancing and playing the piano. During the period, she developed a passion for singing.

Carmen Rasmusen’s life took a great turn of events when she auditioned for the 2nd season the American Idol. She moved to the top 100. However, she could not make it through. Her luck favored her a chance as she re-entered the show as a wild card entry.

After that, she put her heart in her performance. Despite that, she was not able to impress the judges including Simon Cowell. However, she proceeded further in the show and earned a spot in the top 12. In the show, she was eliminated from securing the sixth position in the show and could make in semi-finals.

Apart from music, she has also expanded her career in the acting field too. In 2003, she made the debut in movies with the movie, Pride, and Prejudice as Charlotte Lucas. Following the movie, she featured the movie, Down and Derby as Marilyn.

Besides movies, she also had made appearances in TV series like eTalk Daily, Canadian Idol, and On-Air with Ryan Seacrest.

Through her career as a singer, she has an estimated net worth of $500k. Her earnings as a singer are in the range of $21k to $208k. Apart from that, she also earns through her music album sales.

As of now, she has not been through any sort of controversy and rumors that created a buzz in the media.

Carmen Rasmusen is a hazel-eyed blonde. Her height is 5 feet and 10 inches and has a decent weight.