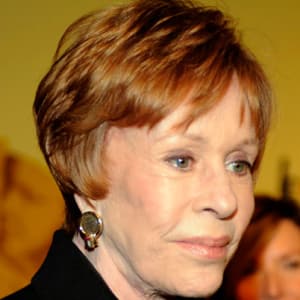 Carol Burnett was married to her college sweetheart Don Saroyan, an actor. The couple tied the knot on December 15, 1955, but they divorced in 1962.

Later, she got married to a TV producer, Joe Hamilton on May 4, 1965, and they were blessed with three daughters: Carrie Hamilton, Jody Hamilton, and Erin Hamilton. They also could not hold the relation and get divorced in 1984. Joe died in 1991 due to cancer.

Then, she married Brian Miller on November 24, 2001, who is a principal drummer and contractor of the ‘Hollywood Bowl Orchestra’.

Who is Carol Burnett?

Carol Burnett is an American actress,  comedian, singer, and writer. She is best known for her television show, ‘The Carol Burnett Show’. It was the first show to be hosted by a woman.

She is successful in the stage, film, and television and her genres range from dramatic to comedic roles. She also made her appearance in various talk shows and as a panelist on the game show.

She was born on April 26, 1933, in San Antonio, Texas. Her father’s name is Joseph Thomas Burnett and he was a movie theatre manager.

Her mother’s name is Ina Louise and she worked as a publicity writer. She had a traumatic childhood because her parents suffered from alcoholism. They were legally separated and she was raised by her maternal grandmother.

She along with his grandmother moved to Hollywood, California, and stayed in a boarding house with Burnett’s younger half-sister Chrissie. She holds American citizenship and her ethnicity is a mix of English and Welsh.

She joined Hollywood High School and graduated from there in 1951. She studied musical comedy and theatre at UCLA.

Carol Burnett left for New York City in 1954 and she got a couple of stints at a local show. But, she made her breakthrough in 1955 from the popular television series, ‘The Paul Winchell and Jerry Mahoney Show’, where she portrayed the role of a girlfriend to a ventriloquist’s dummy.

She played in a novelty song, ‘I Made A Fool of Myself’, made spectators rolling with laughter.

Carol earned her first Tony Award nomination for her role as Princess Winnifred in the 1959 Broadway musical comedy ‘Once Upon a Mattress’. Until 1962, she became the regular player in the series, ‘The Garry Moore Show’. She co-starred with Julie Andrews in ‘Julie and Carol at Carnegia Hall’ and she was awarded her second Emmy for that performance.

Carol made her official debut in film from the movie, ‘Who’s Been Sleeping in My Bed?’. She earned a recurring role in the series, ‘Gomer Pyle, U.S.M.C.’.

She came with the show, ‘The Carol Burnett Show’, and that collected a huge success and garnered loyal viewership that lasted through all the seasons. Carol bagged 23 Emmy Awards and several Golden Globe Awards during the eleven years of the show. She farewelled the show on March 17, 1978.

Carol tried her career at drama in television films ‘Friendly Fire’, ‘Life of the Party: The Story of Beatrice’, ‘The Four Seasons’, ‘Annie’, ‘Noises Off’. She made her television comeback in the 1990s with a couple of varieties shows which include: ‘Carol & Company’, ‘Magnum’, ‘Touched by an Angel’, ‘Mad About You’, and ‘Desperate Housewives’.

She made her guest appearance from 2008 to 2012 in a variety of series, ‘Horton Hears a Who!’, ‘Law & Order: Special Victims Unit’, ‘Glee’, ‘The Secret of Arrietty’ and she made her recent television appearance in ‘Hot in Cleveland’ and ‘Hawaii Five-O’.

She was awarded Emmy Award six times for her outstanding performances in films, theatre, and television. She was given Golden Globe Award five timed for her show, ‘The Carol Burnett Show’ and she was the proud recipient of Kennedy Center Honors in 2003.

Carol Burnett: Net Worth and Salary

It is estimated that she has a net worth of around $25 million and her main source of earning is from her professional career.

She seems to be secretive in nature. She has not been engaged in any rumor and controversies.

Carol Burnett has got a height of 5 ft. 6 inches but her weight is not available. Her hair is blonde and her eyes are blue.

To know more about Mo Gaffney, Dawn French, and Mary Birdsong, please click on the link.