Carol Kirkwood is a divorced woman.

She was married to Jimmy Kirkwood in the year 1990. Jimmy is a property developer.

She took a break from her career after she wed Jimmy.

They stayed married for 18 years. But after that their marriage did not work out. So they divorced in the year 2012.

Being married for more than 25 years old, they did not have any children. At present, she is not linked to anyone. She is single.

Carol Kirkwood provides an update on how she found herself after her separation from her husband of 18 years Jimmy Kirkwood! 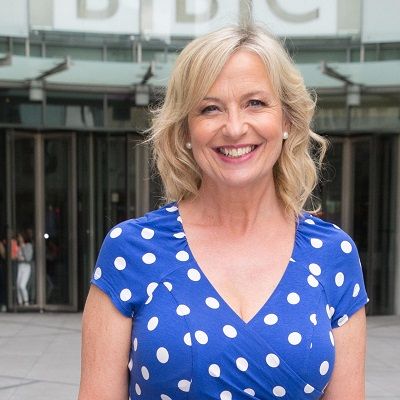 My dad died a long time ago, but I could remember him coming in when I was recording David Cassidy and saying, ‘Carol, have you tidied your room?’ and me saying, ‘dad! SHHHH!

I found the tape at home. It made me cry, hearing my dad’s voice after such a long time. I asked myself, ‘why have I kept this tape? And maybe that’s the reason.

“I found myself when I got divorced. I started to do things and to think, ‘I’m not going to say no, I’m going to say yes!

Who is Carol Kirkwood?

Carol Kirkwood is a weather presenter from Scotland. She is known for working on the BBC. She has also participated in the 13th series of the show Strictly Come Dancing. Similarly, in the year 2018, she has served as a Weather presenter in Hollyoaks.

Carol was born on 29th May 1962 in Morar Highland, the U.S. As mentioned above her ethnicity is Scottish. At present, she is 57 years old.

She was born to her father(Malcolm MacKellaig) but the name of her mother is not revealed. Her father died a long time back.

Similarly, she had seven brothers and sisters in her family and she was the eighth one. Her parents had a hotel in Morar. Likewise, she grew up with her siblings.

Similarly, she enrolled in Napier College of Commerce and Technology in Edinburgh for a commerce degree in BA.

After graduating from college, she started working as the BBC’s secretarial reserve in London. She presented the short slots on BBC Radio Scotland. After that, she presented on BBC Radio 2 and BBC Radio 4. After being married to her husband she left the BBC.

She started working in recruitment and trained as a consultant for a management consultancy in Cheshire. In the year 1993, she rejoined BBC at the corporation’s Elstree Studios training department. She was a freelance presenter. After that in 1006, she joined the UK operation of The Weather Channel.

She started appearing across all BBC Weather’s output on TV and radio which included BBC News, BBC World News, and BBC News at Six. Similarly, she is the main weather presenter on BBC Breakfast. Furthermore, she has also presented The Great British Weather and The Chris Evans Breakfast Show.

In the year 2015, in August Carol announced that she would be a part of Strictly Come Dancing in the thirteenth series. The show began in September 2015. Her partner in the show was Pasha Kovalev. He is a Russian professional Latin and ballroom dancer.

In the years 2003, 2008, 2009, and 2012-2017, she was awarded the TRIC award for best TV Weather Presenter. Similarly, she received an Honorary Fellowship from HRH Princess Anne for “contributions to broadcasting” at Inverness College, part of the University of the Highlands and Islands, on 17 November 2015.

Carol makes a mistake during the weather forecast

In August 2019, Carol made a mistake during the weather forecasts. She was dressed in a leopard print. But she made a mistake while discussing the temperature. She covered her mistake saying that she had bad eyesight.

Carol injured in an accident

Carol tweeted in May 2019 that she had an accident after she was knocked off by a car. She was injured, policemen and the ambulance crew escorted her to the hospital.

The Scottish weather forecaster has an estimated net worth of $5 million.

Similarly, her salary is around $400,000. She might earn a huge amount of money from her career.

Carol Kirkwood has a height of 5 feet 8 inches tall and she weighs around 58 kg. Her hair color is blonde and her eyes color is blue. Her body measurement is 38-28-39 inches.