Carol Vorderman is a British media personality. She is best known for co-hosting the game show Countdown for 26 years from 1982 until 2008. 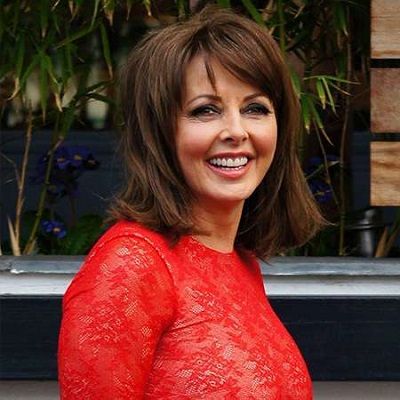 My first marriage was totally unsuitable and shouldn't have happened. It was a whirlwind, rebound thing. I was 23 or 24 - a baby

Change is one of my favourite words

The first couple of days on the detox diet aren't pleasant.

Carol Vorderman has been in multiple relationships with two weddings and two divorces. Her first marriage took place in 1985 when she was 24.

Her husband was a Royal Navy officer named Christopher Mather and he was also a former rugby player who had played at an international level. But the marriage was short-lived and for just 12 months duration and the couple divorced.

Her second marriage was with management consultant Patrick King which happened in 1990 when she was 29. Patrick and Carol have two children; Katie who was born in 1992 and Cameron who was born in 1997. The kids were still small when the couple separated in 2000.

Carol has been in a relationship with Des Kelly since 1999 and separated in 2006.

Who is Carol Vorderman?

Carol Vorderman is a British media personality. She is mostly known for co-hosting the popular game show Countdown for more than 2 decades.

Carol was born in Bedford, Bedfordshire England on  December 24, 1960. Her birth name is Carol Jean Vorderman and she is currently 59 years old.

After the divorce of her parents, she never saw her father until she own self-was 42 years old. Whereas, her mother married an Italian immigrant, Armido Rizzi after separating from her father. Her mother and her stepfather got a divorce after a decade. Later, her biological father again married her mother.

She went to Cambridge where she studied engineering at Sidney Sussex College.

Talking about her profession, she initially worked as a junior civil engineer at Dinorwig Power Station in Wales. Then, she worked as a graduate management trainee in Leeds. She also worked as a backing singer with a friend Lindsay Forrest in the Leeds-based pop ground Dawn Chorus and the Blue Tits.

The group recorded a version of The Undertones’ hit Teenage Kicks. She made regular appearances on the Peter Levy show on Radio Aire during the 1984-85 where she appeared mid-morning to read a story for preschool children. She worked part-time in the Information Services Department of the UK Atomic Energy Authority.

Her mother submitted an application on behalf of her. She worked as a co-host of the show for 26 years until 2008. She became one of the highest-paid women in Britain while working for the show.

Des O’Connor replaced Lynam in 2007. She stepped down from the show after Channel 4 failed to agree to terms for a new contract with her. Vorderman and O’Connor both left the show in December 2006. Gyles Brandreth hosted Vorderman’s final Countdown special show, One Last Consonant. After leaving countdown, she continued to contribute her column to the British magazine.

Then, she presented Loose Women between September 2011 and 2014 before announced her departure in July 2014. He recorded ITV gameshow pilot, Revolution recorded in March 2013 was announced “scrapped” by ITV in June 2013. She was one of the contestants in the 16th series of I’m a Celebrity.. Get Me Out of Here! in 2016, where she finished in eighth place.

She has guest appeared on numerous shows such as Through the Keyhole, Celebrity Fifteen to One, Celebrity Stars in Their Eyes Who Wants to Be A Millionaire.? Top Gear, Ant Dec’s Gameshow Marathon, Who Do You Think You Are?, The Big Fat Anniversary Quiz, 8 Out of 10 Cats, The Apprentice: You’re Fired!, Chris Moyles ‘Quiz Nights Never Mind the Buzzcocks, Question Time, and many more.

She has had a newspaper column in The Daily Telegraph, and in the Daily Mirror on Internet topics. She has written books on Detox diets. Her book, Detox For Life produced in collaboration with Ko Chohan and Anita Bean. She has published several school textbooks under her name such as English Made Easy, Maths Made Easy, Science Made Easy, and How to Pass National Curriculum Maths.

Besides television and journalism, she has expanded her business ventures. She launched a number of Sudoku products. She has launched a brain-training game called Caro Vorderman’s Mind Aerobics together with BSkyB in March 2007.

In the same year, she released a video game, Caro Vorderman’s Sudoku for PlayStation 2 in the United States. After departing from Countdown, she announced a new commercial venture, her own property development, and sales company,  Caro Vorderman’s Overseas Homes Ltd. It specializes in overseas holiday and retirement homes in the Caribbean, the Baham as and Spain.

However, she withdrew from the firm because of the international financial downturn and the venture was suspended training. She launched her new commercial venture of an online mathematics coaching system for 4 to 12 years old children in March 2010.

She was honored as a Member of the Order of the British Empire (MBE). Then, she was Honorary Degree (MA) by the University of Bath.

She has an estimated net worth of around  £18 million (as per 2020 data) and she has earned that sum of money from her professional career.

There are no drastic rumors regarding Carol’s personal and professional life. It seems like she is doing the best job without harming others for which she hasn’t been a part of controversy yet.

Carol Vorderman has a height of 5 feet 5 inches. Additionally, she weighs 55Kg. In addition, she has a measurement of 36-27-35 inches and her bra size is 32D.

Carol’s hair color is blonde and her eye color is light brown. Furthermore, her dress size is 6 (US) and her shoe size is 10 (US).