Carole King is an eminent American singer-songwriter who has been active since 1958. She married four guys and has four children. 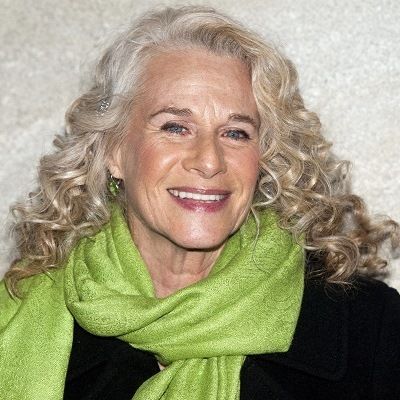 My life has been a tapestry of rich and royal hue, an everlasting vision of the everchanging view.

All I needed to do was sing with conviction, speaking my truth from the heart, honestly and straightforwardly, and to offer my words, ideas and music to the audience as if it were one collective friend that I'd known for a very long time.

I need a reason to make music and I haven't had one.

Carole King has married four times. She married her college boyfriend, Gerry Goffin, in 1959, followed by fellow musician Charles Larkey, in 1970. Both her marriages fell apart after a few years.

She then married Rick Evers and later claimed that he had brutally assaulted her and that he was a cocaine addict. Rick died of a cocaine overdose a few days after their separation in 1978.

She then married Rick Sorenson. Carole also had a long-term friendship with musician James Taylor, with whom she worked on many projects.

She has four children, including musicians Louise Goffin and Sherry Goffin Kondor and artist Molly Larkey.

Who is Carole King?

Carole King is an eminent American singer-songwriter who has been active since 1958, initially as one of the staff songwriters at the Brill Building and later as a solo artist.

Likey, she is the most successful female songwriter of the latter half of the 20th century in the US, having written or co-written 118 pop hits on the Billboard Hot 100.

Likewise, King also wrote 61 hits that charted in the UK, making her the most successful female songwriter on the UK singles charts between 1952 and 2005.

Carole King was born in New York City, New York, the United States on February 9, 1942. Her birth name is Carol Joan Klein and she is currently 78 years old.

Her father’s name is Sidney Klein (firefighter) and her mother’s name is Eugenia Gingold (teacher). Soon after Carole’s birth, the family moved to Brooklyn and bought an affordable two-story duplex.

There is no information about her siblings. Carole holds American citizenship and Ashkenazi Jewish ethnicity. Her birth sign is  Aquarius.

Talking about her profession, Carole King started working as a secretary and wrote songs along with her husband. In 1960, a song written by them, titled ‘Will You Love Me Tomorrow?’ became a mega-hit. This was their first major breakthrough. They quit their day jobs and concentrated on their careers as songwriters.

However, toward the mid-60s, their personal relationship became increasingly strained, in spite of the fact that they tasted significant professional success together. Carole told the story of her heartbreak through her song ‘The Road to Nowhere.’ In the year 1968, she moved to Los Angeles and collaborated with another writer, Toni Stern.

Additionally, the band released only one album, titled ‘Now That Everything’s Been Said.’ Several tours were canceled because of Carole’s severe stage fright. ‘The City’ eventually collapsed and Carole decided to sing her own songs from then on.  It made the record of staying on the ‘Billboard’ charts for six years.

Whereas, some of the hit songs from the albums, such as ‘It’s Too Late’ and ‘Will You Love Me Tomorrow?’. Her third album, ‘Music,’ too was also a roaring success but could not reach the benchmark set by ‘Tapestry.’ It was certified “gold” by the ‘Recording Industry Association of America’ (RIAA).

Moreover, apart from working on her music, Carole kept herself busy with other activities too. As her music career took a downward spiral in the 80s and the 90s, she associated herself with social causes. Toward the late 90s, she was ready to make a comeback to music.

In the year 1997, Canadian singer Celine Dion recorded her hit song ‘The Reason,’ which was written by King. During 2004, Carole recorded a live album, titled ‘The Living Room Tour,’ and in 2007, she toured with young singers Fergie and Mary J. Blige and performed successfully.

She won Best Musical Theater Album, Best Female Pop Vocal Performance at Grammy Awards, she won a Star on the Walk of Fame.

This singer has an estimated net worth of around $70 million and she has earned that sum of money from her professional career.

Currently, there are no desperate rumors regarding Carole’s personal and professional life. It seems she is doing the best job without harming others for which she hasn’t been a part of controversy yet.

Carole King has a height of 5 feet 4 inches and he weighs is unknown. Carole’s hair color is brown and his eyes color is amber.

Also get to know more about Stephanie Lynn, Mary Lambert, and LeToya Luckett.