Caroline Flack was a television host and presenter in reality shows including Love Island, The X-Factor, Strictly Come Dancing and many more. Unfortunately, she did suicide in February 2020. 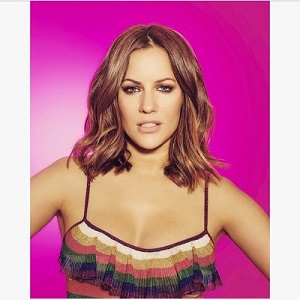 Moroccan Oil shampoo is my miracle product. My hair becomes so manageable and silky after using it

I know I could probably fake love for a couple of days, but I couldn't fake it for more than three or four days, and neither could you. I don't think any of us can

Everyone is battling something emotional behind closed doors - that's life.

Caroline was dating Lewis Burton. There were some legal issues between the two. She was accused of abusing her, fr which they were fighting in the court. Caroline denied the fact and the trial was due in March 2020. Before the trial, she took her life on 15th January 2020.

Back in 2009, she was in a love affair with Prince Harry Windsor. Although she has been into many relationships, it seems like she doesn’t get through it to have a more permanent long-term relationship.

Who was Caroline Flack?

Scotland-born Caroline Flack was a very talented TV presenter. She was also a radio presenter and a model by profession. She was famous for finishing 5th in FHM’s “Sexiest Women” in 2015.

Previously, she won the twelfth series of “Strictly Come Dancing”. She presented the series “Love Island”. Similarly, she also presented “The Xtra Factor” from 2011 to 2013. Furthermore, she covered the show, “I’m a Celebrity…Get Me out of Here! NOW”.

Caroline Flack was found dead in her home in East London, London, the United Kingdom on February 15, 2020. She was just 40 years old. She killed herself and the main reason for her suicide is said to be because of her alleged assault of her boyfriend, Lewis Burton.

After hearing the news, Lewis paid the tribute on his Instagram sharing their picture together with the caption:

“My heart is broken we had something so special.

“I am so lost for words I am in so much pain I miss you so much I know you felt safe with me you always said I don’t think about anything else when I am with you and I was not allowed to be there this time I kept asking and asking.

“I will be your voice baby I promise I will ask all the questions you wanted and I will get all the answers nothing will bring you back but I will try make you proud everyday.

“I love you with all my heart.”

Caroline was born Caroline Louise Flack on November 9, 1979, in Enfield in the capital city of England, London.

She was of to English ancestry and British nationality.

She was the daughter of Ian Flack, father and Christine Flack, mother.

She had a twin sister, Jody.

Caroline, at the age of 21 featured on a small role in the TV show, “Is Harry on the Boat?”. As a career-starter, she played Bubbles on the sketch show “Bo’ Selecta!”. Then she presented the “International Pepsi Chart Show”.

Later in 2005, she joined E4. There she presented various music videos and game shows.

Similarly, she also co-presented the Saturday Morning Show on BBC Two and the CBBC Channel.

She went on working hard. Consequently, she got bigger shows to the present. From 2008 to 2010, she presented “I’m a Celebrity… Get Me Out of Here NOW! ”.

As a model, she modeled for several brands and magazines, including MAXIM.

She, presenting big shows for sure pays her big salary. Along with her good presenting skills comes a good paycheck. Therefore, as a result, her estimated net worth was around $8 million.

While hosting the show, Love Island, her salary was estimated to be £1.2 million per annum.

Caroline was a very talented TV presenter. Previously, she drew criticism for dating Harry Style, who was 14-years younger than her.

Other than that, she likes to keep her distance from these things. As a result, she avoids any public issues and topics that drag her to controversies. Therefore, as of now, there are no rumors about her work and personal life.

Caroline had an average height of 5 feet 4 inches and weighed 63 kg or 139 pounds. Her body stats were 35-27-36 inches. And her bra size was 32C. Her hair color was dyed golden brown and eye color was hazel blue.