Caroline Stanbury is a Personal stylist, reality TV star. Caroline is engaged to a Former Real Madrid Player, Sergio Carrallo. She has three children from her past marriage. 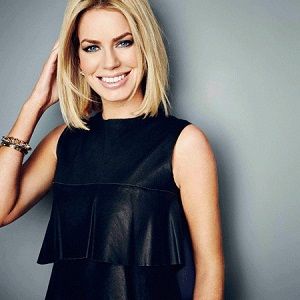 Caroline Stanbury is an engaged woman. She is engaged to Sergio Carrallo. Her fiance Sergio is a Former Real Madrid Player. Sergio proposed to Caroline in the Himalayas of Nepal, above 5400m above the sea level. She also posted the pictures on Instagram with the caption,

“So I have been wanting to share this moment with you all ! 5400 meters up on the holy lakes I said YES !”

She revealed that she is having an affair with Sergio since July 2020.

The couple had an adventurous engagement. Now, let’s see how exciting their wedding ceremony will be!

Previously, she was married Cem Habib in 2004. The couple has three children namely, Yasmine Habib, Zac Habib, and Aaron Habib. Zac and Aaron are twins.

However, the couple started having differences after 17 years of their marital affair. And they decided to split. Caroline and Cem divorced in December 2019. Despite the split, they have maintained a healthy relationship for their children.

Who is Caroline Stanbury?

Caroline Stanbury is an English reality television personality known for co-starring on Ladies of London. She also started her career in public relations and later on worked as a fashion stylist.

Caroline Stanbury was born in London, the United Kingdom on April 28, 1976, to parents Anthony Stanbury and Elizabeth Stanbury.

She belongs to Inglis nationality and English ethnicity. Her birth sign is Taurus. Also, there is no information about her education and academic achievements.

On talking about her profession, after her schooling, she took up the role of public relations professional where she gained quite a reputation for herself working for London’s most elite group.

During 2008, her entrepreneurial journey began with the establishment of “The Gift Library of Caroline Stanbury”

Moreover, her venture became a success among the targeted group of customers as the store was cleaned up very quickly. In 2013, she put her hands into the wedding industry by acquiring “The Wedding Shop” an independent wedding list service of the United Kingdom.

Presently, she is involved in a reality television show Ladies of London produced by Bravo which first aired in June 2014. In 2013, she opened her own bridal boutique cried The Wedding Shop in London.

There is no information about her salary. Her net worth is around $30 million.

On talking about her body measurements, Caroline Stanbury has a height of 5 feet 7 inches. Additionally, she weighs is 55Kg.

In addition, she has a measurement of 34-28-38 inches respectively. Caroline’s hair color is blonde and her eye color is brown.