Posted by MarriedBiography Posted on December 11, 2020 | In Dating , Net Worth , Relationship
Share this 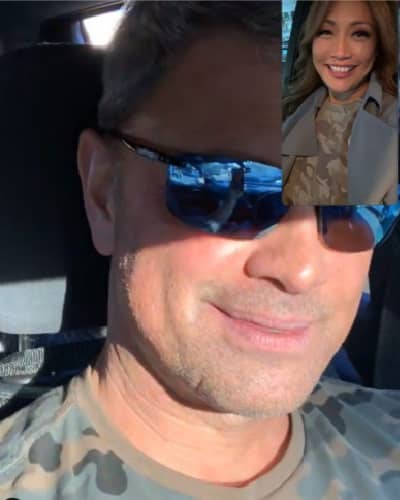 Since break up in 2017, Carrie Ann Inaba had stayed single. Carrie has now officially off the market as she is dating Fabien Viteri. They met each other when they were walking their dogs around their neighborhood. In the season 11 premiere of The Talk, she thanked Sharon Osbourne for manifesting love for her as she sought to be in a relationship.

“So, I met this man; he’s from my neighborhood, and we met, sort of, walking our dogs, and there’s more to the story … He’s older than I am, and he’s a wonderful human being. And now, I understand how a relationship can work. He’s been so supportive and a mature adult ‘cause maybe sometimes I’m not so that’s working really well.”

They are spending time together and she shares pictures with him on Instagram.

The TV star Carrie Ann Inaba has been in quite a few relationships.

In the year 2006, she met Artem Chigvintsev on the set of So You Think You Can Dance. They started dating soon after and made headlines. But their relationship did not last more than 3 years. They broke up and Carrie said some good things about him. She said,

“[He’s] a fine gentleman. I have never gone out with somebody that grounded, always ready to talk it out. I’m very happy for him and the success he’s having.”

After her break up with Artem, she met Jesse Sloan through eHarmony which is an online dating site. eHarmony sent his profile to her and she felt familiar. They two started dating and soon after that they got engaged in March 2011. She accepted his proposal while filling in for Kelly Ripa on Live! With Regis and Kelly.

Jesse got down on one knee and proposed to her for marriage. But their relationship did not work out and they called off their engagement. But they remained friends.

Her second engagement was with Rob Derringer who proposed to her on the beach with a Jean Dousset Diamond ring in December 2016. They engaged in the same place where they had their first date. Everything was going well until they decided to split after nine months. They were set to get married in July 2018 but that never happened.

Carrie Ann Inaba’s net worth is in millions?

As per Celebrity Net Worth, Carrie Ann Inaba has a net worth of $9 million. Carrie bought a 2,252 square-foot home in the year 2007 for $965,000 in Los Angeles, California. The Valley Village area house has a three-bed, two-bath home that offers two fireplaces, serene resting areas, and a guest unit. She sold the house in October 2016 for $1,150,000.

Likewise, she has worked as a performer in films like Rhythm & Jam, Lord of Illusions, Showgirls, Monster Mash: The Movie, Austin Powers: The Spy Who Shagged Me, American Virgin, Boys and Girls’, and more. Carrie appeared as Fly Girl in the TV series In Living Color from 1990-1992. She is the co-host of the show The Talk which she has been hosting since 2017.

Also read Who is Carl Ferro? Know about his married life with Angie Everhart and net worth

Stacey Solomon is engaged to her boyfriend Joe Swash! She displays her huge engagement ring!
Tags : The Talk TV host