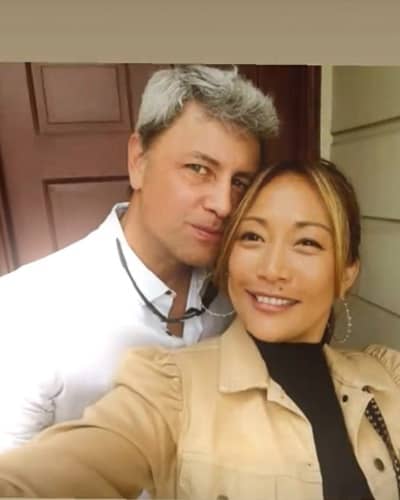 Fabien and ‘Dancing with the Stars’ judge Carrie met around their neighborhood while walking dogs. She publicly opened about their relationship on the episodes of The Talk season 11.

After that, she has been sharing photos with her boyfriend Fabien on her social media handle, IG. Looking at their posts they love camping and enjoy holidaying together.

Fabien and Carrie’s break up

Sadly, the couple split. Carrie recently posted a photo on IG stating that she is single and broke up with her then-boyfriend Fabien. She wrote,

“I am also… grateful for what was. Confused. Uncertain of the future. Sad. Hopeful.”

Now she shares her grief with her followers with an optimistic insight in the future,

Also, she gave a lesson by saying that nothing is permanent with a photo alongside the sun setting over a lake,

“Sometimes the things you thought were forever end up only being temporary. Finding the strength to accept that it’s over is enormously painful. Losing your friend … losing the hopes and dreams … your partner … the person you shared everything with .. your person … your love.”

“It’s hard. [I’m] not going to fake that I am ok. I celebrate my emotions. Because it tells me that I’m alive and that my heart loves deeply. It was real. True love.”

Carrie is a lovely open lady and can take care of herself. And it is definite that she will cope up with this time very soon and fly to start the new chapter of her life.

You may like to read Dogs played cupid for Carrie Ann Inaba and Fabien Viteri!

Carrie was engaged to an accountant Jesse Sloan. She met him on a dating app. He proposed to her on “Live with Regis & Kelly” in 2013. However, the couple broke up.

In 2016, she had an affair with Days of Our Lives actor, Robb Derringer. They had planned for the wedding but they broke up after a year and called off their wedding in 2017.

After Jesse, she dated DWTS star Artem Chigvintsev. The couple met on So You Think You Can Dance. Artem is 14 years younger than her.

Also read “The Mental Thing”-Artem Chigvintsev talks about the weird feeling while having sex with pregnant Nikki Bella!