Carrie Mae Weems is a contemporary artist who is also an amazing photographer. She is married.

The reputed personality, Carrie Mae Weems is in a married relationship with Jeffrey Hoone. Hoone is an Executive Director of Light Work by profession. The duo wedded in the year 1995.

Moreover, she has an only child named Faith C. Weems who was born on 11 December 1969. At the time, Weems was only 16 years old. 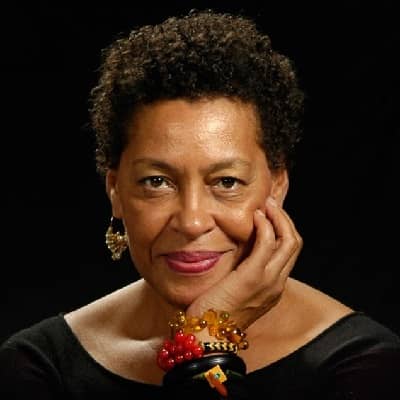 “It's very important for me to really use this body as a barometer of a certain kind of knowledge--to take the personal risk of exposing my own body in a certain kind of way. I can't ask anybody else to do something that I don't do first myself.”

“Despite the variety of my explorations, throughout it all it has been my contention that my responsibility as an artist is to work, to sing for my supper, to make art, beautiful and powerful, that adds and reveals

to beautify the mess of a messy world, to heal the sick and feed the helpless

to shout bravely from the roof-tops and storm barricaded doors and voice the specifics of our historic moment.”

Who is Carrie Mae Weems?

Carrie Mae Weems is popularly known as a significant contemporary artist. Weems works in text, fabric, digital images, and installation videos. She is best famed for her photography.

Also, the artist has worked in several media and grew her practice to include community outreach.

Carrie Mae Weems was born on 20 April 1953. Presently, her age is 67 years old. Likewise, her birthplace is Portland, Oregon.

Carrie Mae is the daughter of her father, Carrie Polk whereas her mother’s name is Myrlie Weems. Likewise, she has six siblings and is the second child among all.

Talking about her nationality, Carrie holds an American identity whereas her ethnicity is African American.

Regarding education, she took her graduation degree from California Institute of the Arts, Valencia at the age of 28 years old in B.A.

The famous photographer, Carrie Mae Weems started working in the labor movement in her early twenties. She was politically active as a union organizer. After being motivated by The Black Photography Annual, she decided to make her career in photography.

To work, Weems shifted to New York City and joined Studio Museum in Harlem. There, she collaborated with different other artists and photographers like Coreen Simpson and Frank Stewart. She also took a photography class in 1976 at the Museum and Carrie’s teacher was Dawoud Bey.

Going on, Carrie Mae finished her first collection of photographs, text, and spoken word in 1983, called Family Pictures and Stories. She completed her next series, Ain’t Jokin in the year 1988.

At present, She is an Artist in residence at Syracuse University.

The great artist has earned handsome money from her successful career. She has worked as being photographer, artist, and so on.

It is reported that Carrie Mae Weems has an estimated net worth of $1 million as of 2022.

However, she has not revealed her exact salary, earnings, and assets details to the public yet.

The well-named personality has never been part of any controversial matter or rumors till now. Carrie has maintained her profile clear.

It seems that she does not want to mix her personal and professional life.

The successful artist has beautiful looks and an admirable personality. Weems has black eyes as well as black curly hairs.

67years old, Carrie has maintained her body fit and balance her bodyweight.

However, she never revealed her exact height, weight, and other physical details in the public yet.

About her social media presence, Carrie Mae is an active personality on social media. She has more than 38.5k followers on her official Instagram account @carriemaeweems. Weems is also active on Twitter with more than 3.5k followers.

Furthermore, she is also available on Facebook with nearly 6.5k fans and supporters.