He co-produced ‘New Year’s Eve with Carson Daly’ from Times Square from 2003.

Carson Daly is in a married relationship with Siri Pinter (daughter of American actor, Mark Pinter) since 2005. Siri happens to be a food blogger.

This couple is blessed with four children. The eldest son is Jackson James Daly was born on 15th March 2009.

Then two daughters, Etta Jones Daly and London Rose Daly were born on 6th September 2012 and on 20th August 2014 respectively.

Their fourth child was born in 2020. They named her Goldie Patricia Daly.

About Carson’s past affairs, he had a relationship with Jennifer Love Hewitt from 1997-1999. He then was in an affair with Tara Reid from March 2000.

They got engaged and were in a live-in relationship. But in June 2001, they called off their engagement. 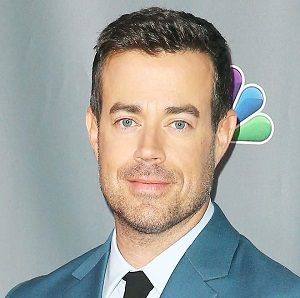 I think long-lasting, healthy relationships are more important than the idea of marriage. At the root of every successful marriage is a strong partnership.

You have to change the set, stay ahead of the curve.

Who is Carson Daly?

Carson Daly is a television/radio host and producer. He joined NBC in 2002 and came to the limelight with his show ‘Last Call with Carson Daly’. He co-produced ‘New Year’s Eve with Carson Daly’ from Times Square in 2003.

Carson was the host of the reality music show ‘The Voice’ in 2011. He is the co-founder of the record label ‘456 entertainment’.

Carson was born on 22nd June 1973, in Santa Monica, California, United States. His nationality is American and his ethnicity is Irish.

Her birth name is Carson Jones Daly. Carson Daly was born to Pattie Daly Caruso(mother) and J.D.Caruso(father). He has a sister named Quinn Daly.

His biological father expired due to bladder cancer in the year 1979. After the death of his father, his mother remarried Richard Caruso and he and his sister lived with their mother and stepfather.

His mother died due to a heart attack at the age of 73. His stepfather(85) also expired five weeks after the death of his mother from bone cancer.

He is an alumnus of Santa Monica High School where he was a member of the school’s golf and drama team. He had once wanted to be a priest.

Then Carson joined theology at Loyola Marymount University but left it within a year to pursue a career in his favorite sport, golf.

Carson Daly joined the radio and worked as an intern under Jimmy Kimmel. He was noticed by MTV who recruited him as a VJ for their channel.

He gained fame with his show ‘Total Request Live’ which was aired from 1998-to 2003. Many other popular shows came his way and enhanced his career. He assisted Guinness Company to make the Irish celebration of Saint Patrick’s day a federal holiday.

Daly has gifted a 614ce green Taylor’s guitar to singer, songwriter, and actress, Michelle Branch on his show Total Request Live. He is a Primetime Emmy award winner.

He is a popular host and producer. From his career, sources have estimated his net worth at $45 million and salary at around $40,000 per annum.

Carson accepted Jennifer Lopez’s 10-day challenge of cutting out carbs and sugar and he completed the challenge.

This versatile personality has been rumored to be in multiple relationships before 2007. There were also rumors of his romantic involvement with models Christian Aguilera and Jaime Pressly.

He had some controversies related to his tweets on protests in Baltimore in 2015.

Carson also had to tender an apology for his comments on his radio program about the JetBlue mid-air crisis where the mentally unstable pilot had to be restrained by passengers on the flight to Las Vegas.

In the 1990s, Carson Daly had to face criticism for losing weight to improve their attractiveness.