Posted by MarriedBiography Posted on March 27, 2020 | In Child , Married , Pregnant
Share this 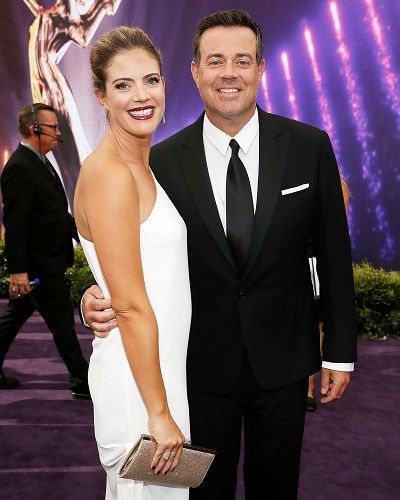 Good news for the Carson Daly fans. The TV hosts Daly revealed the news of the birth of his 4th child on 26th March 2020. He took to Instagram to announced the birth of their third daughter, Goldie Patricia Daly, with wife Siri Pinter. He wrote,

“Daly Planet Exclusive!
Carson & Siri Daly (Hi! That’s us!) along with proud siblings Jackson James (11) Etta Jones (7) and London Rose (5) are beyond thrilled to announce the arrival of Goldie Patricia Daly! She was born at 4:08pm (ET) coming in at 8.2lbs & 20 inches long.”

“Go Go and mom are doing great. The Daly family wants to send a special shout out to the incredibly brave & selfless medical staff at our hospital in New York and also the many courageous people on the front lines of this dreadful virus,”

He thanked God for the safe birth of his daughter. The TV host announced the news of his wife’s pregnancy back in September 2019. He revealed it to his co-hosts,

“Siri Daly, my incredibly wife, she is gearing up for a big spring because that is when she’s going to give birth to our fourth and newest member of the Daly family. That’s right, she’s pregnant. I love you. Have a great weekend everybody.”

After breaking engagement with Tara Reid in June 2001, Carson started dating Siri Pinter. They got engaged in the year 2013. After that, they announced their wedding on 23rd December 2015.

It was a small ceremony attended by their family. They were together for 10 years. His wife is a self-taught cook who frequently appears on TODAY to share her delicious recipes. Similarly, she also runs a fun (and often funny) food blog, SiriouslyDelicious, on which she shares homemade recipes for her favorite meals, snacks, and desserts.

Talking about their first date, she told that he did everything right. It was all had to do with food. She revealed that he knew how much he loved baking. Carson invited her over and requested to spend the day filling his house with freshly made cookies and brownies.

Who are Carson and Siri’s other children?

Recently, the family of five became six with the birth of their 4th daughter Goldie Patricia Daly.

Carson Daly is a television/radio host and producer. He joined NBC in 2002 and came to limelight with his show ‘Last Call with Carson Daly’. He co-produced ‘New Year’s Eve with Carson Daly’ from Times Square from 2003.

Carson was the host for reality music show ‘The Voice’ in 2011. He is the co-founder of the record label ‘456 entertainment’. Read bio…