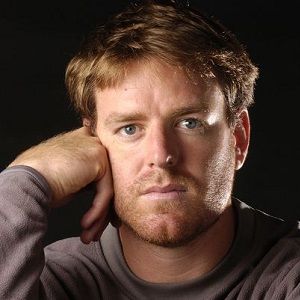 I used to come to practice and go through the motions. I don't do that anymore. I look forward to practices. I even enjoy the windsprints

Carson Palmer is married to Shaelyn Palmer since July 5, 2003. Their wedding was held in Pebble Beach, California, US. The couple is also blessed with twins, so Fletch and daughter Elle. And currently, he happily resides with his family in San Diego, California.

Carson is a bit private regarding his personal life and his marriage. He has not shared many details about his married life until now. But in reference to his social media posts, he seems happy with his personal life. His constant post of his children and his wife shows that he is getting most out of his marriage. And as of now, there are not any rumors and news about his affairs and other relationships.

Who is Carson Palmer?

Carson Palmer is an American football player. He is widely popular as a quarterback of the Arizona Cardinals. Previously, he also has played for Cincinnati Bengals and Oakland Raiders. Also, he played college football at USC Trojans football.

Carson Hilton Palmer was born on December 27, 1979. The couple Dana Palmer and Bill Palmer gave birth to their son, Carson in Fresno, California, US. Carson also has two brothers, Jordan Palmer and Robert Palmer and a sister, Jennifer Santos. Jordan is also an American indoor football player and he is currently playing for Tennessee Titans.

Talking about Carson’s childhood, he was raised by his parent in his hometown. But he has not shared many of his childhood memories and experiences with us.

Carson had a very athletic body even in his childhood. This led him to play football from the small age. He played for his high school with great success. Following this, he played college football at USC Trojans football. Also, he played for Orange County as a quarterback.

Carson started his professional career as a footballer since 2003 when was picked by Cincinnati Bengals. After playing in the rookie season in 2003, he first appeared in NFL in 2004 against New York Jets. After having a successful season in 2005, his contract was extended for the monetary value of $118.75 million for over nine years. He continued playing for Bengals till 2010 with numerous outstanding stats.

Furthermore, he decided to retire from football in 2010. However, the man of such caliber was highly effective in the game. So, Oakland Riders included Carson in the team. He first played for Raiders in 2011 season as the replacement of Jason Campbell. He then represented Raiders for another one season.

Despite numerous injuries and health issues, Carson was continuously showing his ability to cope with such difficulty. In 2013, Arizona Cardinals picked him from 2013 NFL Draft. When he first played for Cardinals, he ranked 8th in the NFL in the passing yard. He was having really good time with Cardinals for the following season with some match-winning performances. And, he is still playing for the same them.

Carson Palmer: Salary and Net Worth

Carson has a huge salary of $28.5 million. Furthermore, according to Forbes, his net worth is about $110 million. And, he is still growing his wealth alongside his fame.

Recently, Carson was not able to play the whole season for Cardinals due to his broken arm. After this, there are some rumors relating to his retirement. However, there is not any official news addressing the rumors. So for now, it remains question still to be answered.

Carson is 6 feet 5 inches tall. He is a good looking guy with blonde hair and light green eyes. Furthermore, he weighs about 107 Kg. But, many other details regarding his body measurements are currently missing.