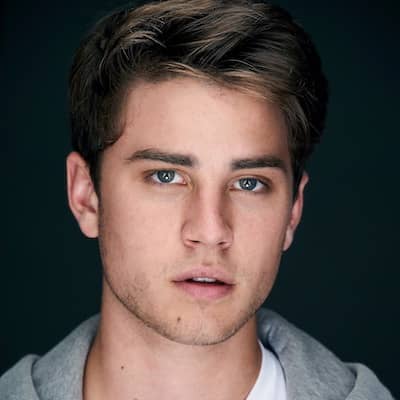 Carson Rowland at present time is in a relationship. He is dating a girl named Maris Kenny who is often seen in his social media posts.

In July 2021, he posted an adorable picture of them where he was seen down in his knee. He captioned this photo forever and always.

Carson previously had a brief romantic affair with Alexandra Hook.

Who is Carson Rowland?

Carson Rowland is a popular American actor. He is popular for his acting skills in Tweet: The Series, I Am Frankie, and more.

At present, he is busy portraying the character of Tyler ‘Ty’ Townsend in Sweet Magnolias (TV Series).

His birthdate is 03 Nov 1997 and he was born in Boca Raton, Florida, USA. The name of his mother was Lori Anne and his father is William.

Carson’s ancestry is Caucasian and has a brother named Connor. His sisters are Catherine plus Carolynn.

Regarding his academics, he attended Florida Atlantic University and passed out with a BS degree in Neuroscience.

Carson Rowland is a popular face of the entertainment world who has appeared in several TV plus movies. His movie is titled Santa in Training as Slippy that was released in the year 2019.

Some of his other short screen projects are,

Moreover, he was seen in TV shows like American Housewife (2020) as Will Hansen and Tweet: The Series (2015) as Riley Sturgis.

As of 2021, he has earned a net worth of around $500k US. The annual salary from his acting journey is yet to be calculated.

This I Am Frankie famed actor is keeping himself away from rumors and desperate scandals.

Carson Rowland’s height is 5 ft 8 inches and his body weight is 68 kg. Moreover, his eyes are blue and his hair is in dark brown color.

Also, he runs a YouTube channel that has over 11.9k subscribers.

Coby Bell
Tags : Actor I Am Frankie Tweet: The Series